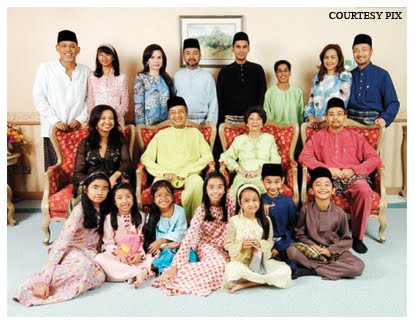 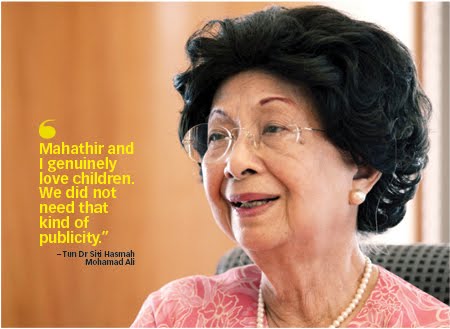 This time I am featuring an interview I did with former first lady who talks about motherhood. I met her at Petronos Twins Towers. The story appears in the sun on April 28 2008. Photos you are seeing is Tun Dr Siti Hasmah Mohamad Ali with her family

Tun Dr Siti Hasmah Mohamad Ali is a woman who needs no introduction. The wife of former prime minister Tun Dr Mahathir Mohamad has long made her mark in the public’s eye. But despite a busy career as a doctor and, later, as wife to the premier, this mother of four has room in her heart to take in three other children – all for the love of them.
Her own children – Marina, Mirzan, Mokhzani and Mukhriz – had also taken their adopted siblings – Melinda, Mazhar and Maizura – to heart right from the start.
Melinda was the couple’s god-child initially. When she was six months old, she fell ill and her parents brought her to Mahathir’s clinic in Alor Star. That was in 1960.
Siti Aishah (as she was known then) recovered and her parents were so grateful they wanted Mahathir and Siti Hasmah to be her godparents.
“There was a special ceremony where a white string was tied on our wrist to signify we are Siti Aishah’s godparents and prayers were said,” Siti Hasmah recalls in an interview with theSun.
After the ceremony, Siti Aishah went home with her parents who were farmers. Six years later, they met again. This time round, Mahathir had made a house call to tend to her sick younger brother.
Siti Aishah wanted to follow Mahathir home so he brought her back. She fitted into the family nicely and built a strong bond with her new siblings.
Mahathir and Siti Hasmah then decided to adopt Siti Aishah legally and changed her name to Melinda. “During the school holidays, she would go back to visit her real parents,” says Siti Hasmah. “My children would get anxious and worried that Melinda might not return home and stay with her biological parents instead.” But her children had nothing to worry about. Melinda is now married with two children, both studying in Melbourne.
Mazhar and Maizura were adopted in 1983, when Siti Hasmah’s children were all overseas. The urge came upon the couple during a state visit to Pakistan. On their arrival at the airport, the couple were greeted by a girl and boy dressed in traditional Pakistani costume. The children struck such a chord in Mahathir’s heart that he wanted to adopt them. The following year, their wish came true. A six-month-old girl and nine-month-old boy, whom they named Maizura and Mazhar, came into their lives. Now, Maizura, 24, is pursuing a Mass Communications degree while Mazhar is doing music at an art academy.
“Mahathir and I genuinely love children,” she says in response to innuendos at that time that they had adopted the two children as a publicity tool. “We did not need that kind of publicity. I do not know what to call such people with such thoughts. It is so sad that people misconstrue our good intention.” The only complaint she got from her other children was that she was spoiling the two younger ones.
“In Islam, when you adopt a child, you have to care for the child with more compassion than your own, especially if he comes from an orphanage,” she says. “But I do not believe I am spoiling them.”
When any of the children misbehaved, she would send them to their father who is a strict disciplinarian. She also told the teachers and headmasters that her children should not get any special privileges.
At first, she kept the fact that they were adopted from Maizura and Mazhar. She wanted to find the right time to tell them the truth. But the two soon suspected something amiss.
“The boy did ask me whether I was his real mother,” she remembers, adding that she covered up the truth.
Then, Maizura told her a story about her friend’s mother who paid somebody for a child. “But I explained to her that such things do not exist.”
Finally, the truth came out when the children were about 10. It was after lunch and Mazhar asked whether they were adopted. Siti Hasmah told the boy: “So let us go ask daddy the question.”
She recalls: “I had to wake up my husband (who was taking a nap) and told him that his son has a question for him. When he heard it, he was quiet for while and said mummy would answer the question. I was so mad with him for passing the buck to me!” Of course, Siti Hasmah explained to the children. “I asked them if they would love my husband and I less after knowing we are not their biological parents,” she says. “I was very emotional. Both of them said no and hugged us.”
Like most adopted children, they were curious about their biological parents. For Mazhar, his mother had died and his businessman father left him with his grandmother. But she was too old to look after him and left him at an orphanage.
For Maizura, she was abandoned in hospital and was brought to the orphanage. “Maizura wanted to know if we paid anything for them and I said not a single sen.”
Though she promised Mazhar that she would try to trace his father, sadly, the orphanage had disposed off all the records.
Asked how she rates her husband as a father, she says: “He is a loving father. As adults, the children have different opinions and they may argue with him. Eventually, they will come together and love each other. Their love for their father is not lessened by the difference in opinions.”
As for herself, she feels she could have done more as a mother. “I have done the best I can but sometimes I feel so inadequate and I feel I could have done more
Posted by Bissme at 7:01 AM