This story was published in theSun newspaper on  June 15, 2012  in conjunction with father's day that falls on June 17.  It is story about a  close relationship between a father and daughter who have different opinions but who still  respect each other. 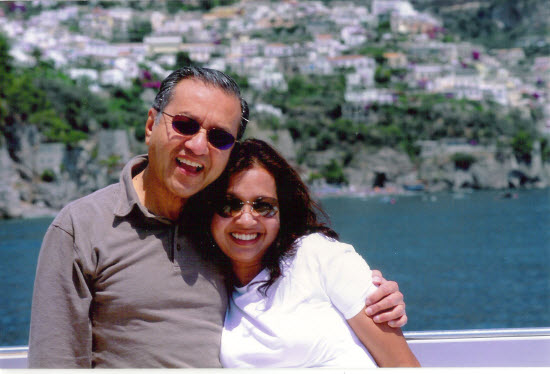 Headline : My Father's Daughter
By Bissme S
THE world knows him as the former prime minister of but to Datin Paduka Marina Mahathir, Tun Dr Mahathir Mohamad is the man she calls dad.He was strict about matters pertaining to school but, at the same time, very affectionate towards his children, says this writer and human rights activist about her father.
“He cannot tolerate bad manners and rudeness,” adds Marina, 55, who is the first of seven children of the 86-year-old Mahathir and Tun Dr Siti Hasmah Mohd Ali.
“I remember as a child, he spanked me because I stuck my tongue out at our gardener.”
But when it comes to his 17 grandchildren, it is a totally different picture. The strict father turns into a much more lenient and indulgent grandfather.
“Once I smacked one of my children lightly and he scolded me: ‘Don’t smack my granddaughter’!
But like any child growing up with strong opinions, Marina’s obvious support for the Bersih street demonstrations last year and this year had set some tongues wagging that it had caused a serious rift between father and daughter.
, however, denies this. “I took part in Bersih because I believe in fair and clean elections. I don’t think I’ve done anything wrong.
“I’ve stated my opinions and my dad has stated his opinions. Our opinions happen to be different.
“But both my father and I believe that it’s okay to have different opinions.”
She feels that some people are making a big deal out of their differences in their opinions.
“They want me to say that my dad’s opinion is wrong. I’m not going to do that. He is my father. Would you do that to your father?I respect his opinions the way he respects mine.”
also feels that her father had brought about much progress to the nation during his tenure as prime minister.
“I know people would say that I only have good things to say about him because he’s my father.
“But I’m sure that our history would reflect a much more balanced account of his contributions to this country.
“As people enjoy the fruits of development, they want more. In particular, they want more space for different ideas to be aired and for that, they need the freedom of expression and speech.”
says Malaysians generally do not appreciate her father until they travel and meet foreigners, especially other Asians, who yearn for a leader like him.
Recalling a 2008 visit to the Asian University for Women, on whose International Advisory Committee she sits, in Chittagong, Bangladesh, she says the people there looked up to her father and regarded him with respect and admiration.
“I was treated like a rock star’s daughter when I was there,” she recalls. “Everywhere I went, I was greeted by journalists and people eager to meet me just because I was related to him.
“They admired dad for what he had done for . They wished they could have a leader like him.”
On allegations that Mahathir had curbed press freedom in when he was the prime minister, has this to offer: “He had, shall we say, a fractious relationship with the media. It was one of those things I’d always disagreed with him.
“But he was always far-sighted when it came to new technology.
“I remember one of his ministers wanted to ban the use of fax machines but he would not allow it.
“We must also not forget that he set up the Multimedia Super Corridor.
“Whatever you may say about my dad, you cannot deny that he has an intellect far superior to that of most people today. He certainly reads more than almost anyone in public office too.”
When asked about her opinion on internet forums that criticise her father, she says: “I don’t read what they say. What’s the point of reading them? They are not going to change their opinions, no matter what you do.
“My father had never gone around thinking that he’s the most popular guy on earth. If you do your job with the idea of being popular, you already have the wrong approach.
“For that matter, I don’t even read his fan forums either.”
She also points out that her father was a strong supporter of women’s rights and one of the few leaders around who had the guts to stand up against those religious scholars who used religion to deny women their rights.
“Once, my friend told me that she had heard an Ustaz declaring in his religious sermon that ‘it’s better to roll in mud with a pig than shake hands with a woman’.
“Later, I told this to my mum and she related it to dad.Then, at the very next Umno general assembly, my father brought up what the Ustaz had said and asked how he could have forgotten that his mother, sisters and wife were also women and how he could have spoken of them in such a degrading manner.
“For saying that, my father received a standing ovation, including from those women who really should have stood up against men who have such a sexist attitude.”
Posted by Bissme at 9:04 AM No comments:

Helmy Samad On A Samad Said 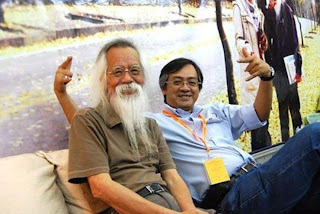 Headline : On being the son of a living legend

WRITER-publisher Helmy Samad can talk to his father about anything – including his love life.That's how he describes his relationship with his father, National Laureate A. Samad Said.


"He knew who all my girlfriends were," adds Helmy, the second of five children in the family.
Last year, when his marriage was on the rocks, Helmy instinctively turned to his 77-year-old father for advice. "My dad only said one thing to me: 'Jadi anak jantan (be a man)'," he recalls.
Now, at 48, Helmy is a single parent to two boys – Muhamad Firdaus, 23, who is pursuing a Master's degree in Mass Communications, and five-year-old Ali.

"My eldest son and my father have different ideologies and they can debate for hours," Helmy says.
"But my father doesn't mind the difference of opinions between them. He feel it's better for his grandson to have a stand in life than to have none at all."
One virtue that Helmy's father taught him is kindness and now he is instilling this value in his sons.
"These days, people believe that kindness is a mark of a loser," says Helmy. "But some of the greatest people in history displayed kindness and one of them was Mahatma Gandhi."
"It's not easy to be kind," he adds.
Helmy also points out that his father never scolded his children in public.Recalling an incident which occurred in his childhood, Helmy says his neighbour had caught him smoking with his friends. When the neighbour complained about it to his dad, Samad had said: "So what?"
"My neighbour went away feeling embarrassed but I got a two-hour lecture from my dad. The point was that he didn't want to embarrass me in front of the neighbour."
When he and his siblings were young, his father also instilled in them a love for the arts by encouraging them to draw and paint.
"If he liked one of our paintings, he would buy it at 50 sen or so. That reward created some kind of excitement in us and also healthy competition between me and my siblings."
Ten years ago, Helmy gave up his lucrative career as a computer programmer to follow in his eminent father's footsteps. He became a writer.
"My father discouraged me [from becoming a writer] and he kept telling me that a writer's life is a hard life," he says.
"But at the same time, he gave me books to read to broaden my horizon."
When some of his short stories were published, there were some critics who began to compare his writings with that of his father's.
Helmy became frustrated at one point and even quit writing for a while.
"I was just starting out as a writer and to make that kind of comparison was unfair," he says. "I believe my writing style is different from my father's."
But his dad advised him to continue writing. "He told me that it's only natural that people will compare me to him and with other writers."
Last year, Helmy finally went back to writing and even started a publishing company, Wira Bukit Sdn Bhd, which mainly publishes his father's books.
"But my father and I are lousy businessmen," he says, laughing.
"We like giving away books because we want to encourage reading among Malaysians. But then giving them away for free is not good for business."
To date, Helmy has written three novels which have yet to be published.
"I'm more mature now to handle any comparisons that critics may make between my literary works and my father's," he says.
Of late, his dad had been making headlines for taking part in the recent Bersih 3.0 protests and some quarters had even accused him of creating trouble in the country.
Helmy begs to differ, saying: "Like all peace-loving citizens, my dad was merely pressing for fair elections and seeking an end to corruption.
"My father has always fought against injustice. If he sees something is wrong, he would speak out."
Although Helmy admires his father's courage, he fears for his safety.
"My father lives a simple life and moves around freely ... it's easy for someone to harm him. I've voiced out my concerns but dad says life and death is in God's hands."
Posted by Bissme at 2:44 AM 2 comments: