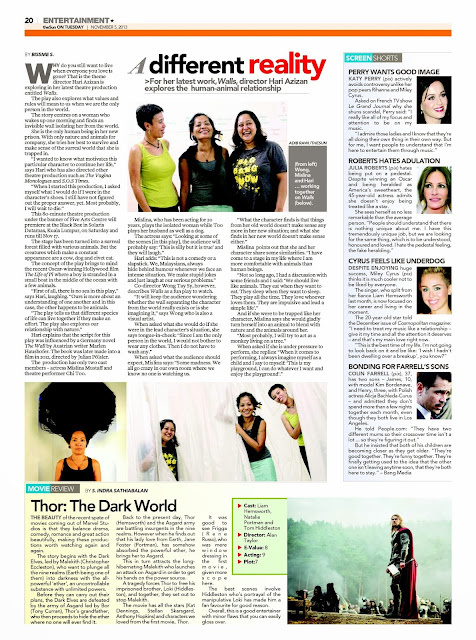 I will be watching theater production called Walls on this coming Friday. I have interviewed the two directors and one lead actor of the production. The story appeared in the sun on Nov 5. It sounds an interesting production. Read the full interview here


WHY do you still want to live when everyone you love is gone? That is the theme director Hari Azizan is exploring in her latest theatre production entitled Walls.The play also explores what values and rules will mean to us when we are the only person in the world.
The story centres on a woman who wakes up one morning and finds an invisible wall isolating her from the world. She is the only human being in her new prison. With only nature and animals for
company, she tries her best to survive and make sense of the surreal world that she is trapped in.
“I wanted to know what motivates this particular character to continue her life,” says Hari who has also directed other theatre production such as The Vagina Monologues and S.O.S Times.
“When I started this production, I asked myself what I would do if I were in the character’s shoes. I still have not figured out the proper answer, yet. Most probably,  I will wait to die.”
This 80-minute theatre production under the banner of Five Arts Centre will premiere at the Black Box in Solaris Dutamas, Kuala Lumpur, on Saturday and runs till Nov 17.
The stage has been turned into a surreal forest filled with various animals. But the creatures which make a constant appearance are a cow, dog and civet cat.
The concept of the play brings to mind the recent Oscar-winning Hollywood film The Life of Pi where a boy is stranded in a small boat in the middle of the ocean with a few animals.
“First of all, there is no sea in this play,”says Hari, laughing. “Ours is more about an understanding of one another and in this case, the other happens to be animals.
“The play tells us that different species of life can live together if they make an effort. The play also explores our relationship with nature.”
Hari explains that the script for this play was influenced by a Germany novel The Wall by Austrian writer Marlen Haushofer. The book was later made into a film in 2012, directed by Julian Pölsler.
The production has only two cast members – actress Mislina Mustaff and theatre performer Chi Too.Mislina, who has been acting for 20 years, plays the isolated woman while Too plays her husband as well as a dog. The actress says: “Looking at some of the scenes [in this play], the audience will probably say: ‘This is silly but it is true’ and they will laugh.”
Hari adds: “This is not a comedy or a slapstick. We, Malaysians, always hide behind humour whenever we face an intense situation. We make stupid jokes and just laugh at our serious problems.”
Co-director Wong Tay Sy, however, describes Walls as a fun play to watch.
“It will keep the audience wondering whether the wall separating the character from the world really exists or is she imagining it,” says Wong who is also a visual artist.
When asked what she would do if she were in the lead character’s situation, she says tongue-in-cheek: “Since I am the only person in the world, I would not bother to wear any clothes. Then I do not have to wash any.”
When asked what the audience should expect, Mislina says: “Some madness. We all go crazy in our own room where we know no one is watching us. What the character finds is that  things from her old world doesn’t make sense anymore in her new situation; and what she finds in her new world doesn’t make sense either.”
Mislina points out that she and her character share some similarities. “I have come to a stage in my life where I am more comfortable with animals than human beings.
“Not so long ago, I had a discussion with some friends and I said: ‘We should live like animals. They eat when they want to eat. They sleep when they want to sleep. They play all the time. They love whoever loves them. They are impulsive and lead a simple life’.”
And if she were to be trapped like her character, Mislina says she would gladly turn herself into an animal to blend with nature and the animals around her.
“Most probably, I will try to act as a monkey living on a tree.”
When asked if she is under pressure to perform, she replies: “When it comes to performing, I always imagine myself as a child and I say to myself: ‘This is my playground, I can do whatever I want and enjoy the playground." 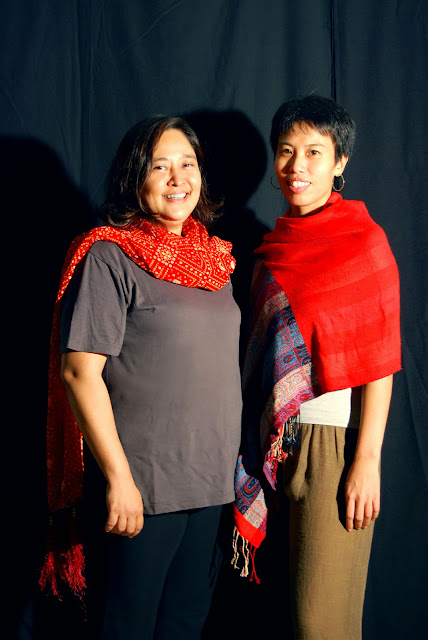 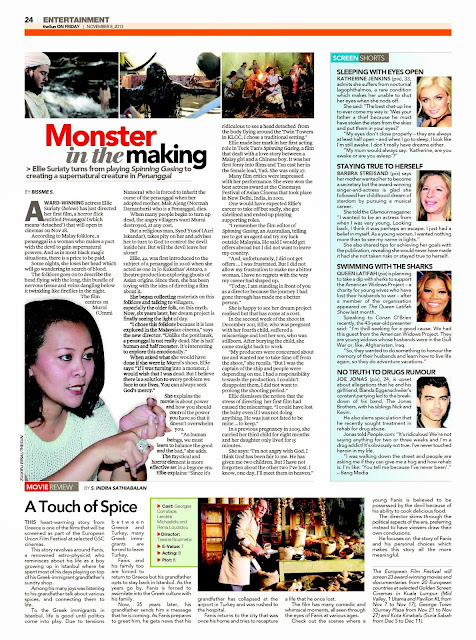 Today I am highlighting an interview with actress Ellie Suriaty who talks about her first experience as a film director. This interview appears in theSun on Friday Nov 8. Here is the full article


Headline: Monster In The Making
By Bissme S

AWARD-WINNING actress Ellie Suriaty (below) has just directed her first  film, a horror flick entitled Penanggal (which means ‘detached’) that  will open in cinemas on Nov 28.According to Malay folklore, a penanggal is a woman who makes a pact with the devil to gain supernatural powers. And as in most black magic situations, there is a price to be paid. Some nights, she loses her head which will go wandering in search of  blood. The folklore goes on to describe the head flying with the long, thin bundle of nervous tissue and veins dangling below it twinkling like fireflies in the night. The film centres on Murni (UmmiNazeera) who is forced to inherit the curse of the penanggal when her adopted  mother, Mak Ajeng (Normah Damanhuri) who is a Penanggal, dies.
When many people begin to turn up dead, the angry villagers want Murni destroyed, at any cost. But a religious man, Syed Yusof (Azri  Iskandar), takes pity on her and advises her to turn to God to control the devil inside her. But will the devil leave her alone?
Ellie, 42, was first introduced to the subject of a penanggal in 2006
when she acted as one in Jo Kukathas’ Antara, a theatre production exploring ghosts of Asian origins. Since then, she has been toying with  the idea of directing a film about it.
She began collecting materials on this folklore and talking to
villagers, especially the older folk, on this myth. Now, six years
later, her dream project is finally seeing the light of day.
“I chose this folklore because it is less explored in the Malaysian
cinema,” says the new director.
“Unlike the pontianak, a penanggal is not really dead. She is half
human and half monster. It’s interesting to explore this emotionally.”
When asked what she would have done if she were in Murni’s shoes, Ellie says: “If I was turning into a monster, I would wish that I was dead. But I believe there is a solution to every problem we face in our lives. You can always seek God’s mercy.”
She explains the movie is about power and how you should control the power you have so that it does not  overwhelm you.
“As human beings, we must learn to balance the good and the bad,” she adds.
The mystical and horror element is more effective set in a bygone era.Ellie explains: “Since it’sridiculous to see a head detached from
the body flying around the Twin Towers in KLCC, I chose a traditional  setting.”
Ellie made her mark in her first acting role in Teck Tan’s Spinning
Gasing, a film that dealt with a love story between a Malay girl and a Chinese boy. It was her first foray into films and Tan cast her in
the female lead, Yati. She was only 27.
Many film critics were impressed with her performance. She even won the best actress award at the Cinemaya Festival of Asian Cinema that took place in New Delhi, India, in 2001.
One would have expected Ellie’s career to take off but sadly, she got sidelined and ended up playing supporting roles.
“I remember the film editor of Spinning Gasing, an Australian, telling me to get an agent and try my luck outside Malaysia. He said I would  get offers abroad but I did not want to leave my country.
“And, unfortunately, I did not get offers … I was frustrated. But I did  not allow my frustration to make me a bitter woman. I have no regrets with the way my career had shaped up.
“Today, I am standing in front of you as a director because the journey I had gone through has made me a better person.”
She is happy to see her dream project realised but that has come at a cost. In the second week of the shoot in December 2011, Ellie, who was pregnant with her fourth child, suffered a miscarriage and lost her son, who was stillborn. After burying the child, she came straight back  to work.
“My producers were concerned about me and wanted me to take time off from the shoot,” she recalls. “But I was the captain of the ship and people were depending on me. I had a responsibility towards the production. I couldn’t disappoint them. I did not want to prolong the shooting period.”
Ellie dismisses the notion that the stress of directing her first film had caused the miscarrage. “I could have lost the baby even if I was not doing anything. He was just not fated to be mine ... to keep.”
In a previous pregnancy in 2009, she carried her third child for eight months and her daughter only lived for 15 minutes.
She says: “I’m not angry with God. I think God has been fair to me. He has given me two children. But I have not forgotten about the other two I’ve lost. I know, one day, I’ll meet them in heaven.” 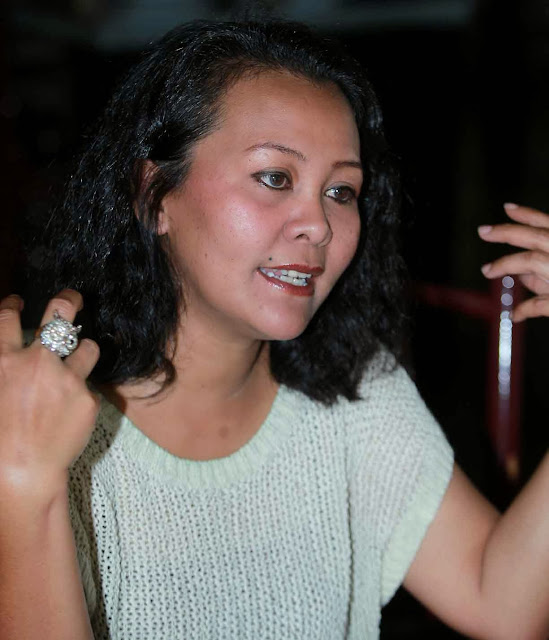 Ellie during the interview with theSun newspaper 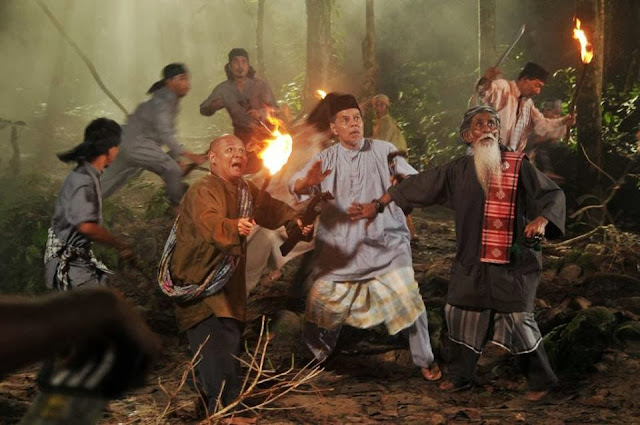 A scene from the  Penanggal ... The village folks are living in fear of ghost that is haunting them. 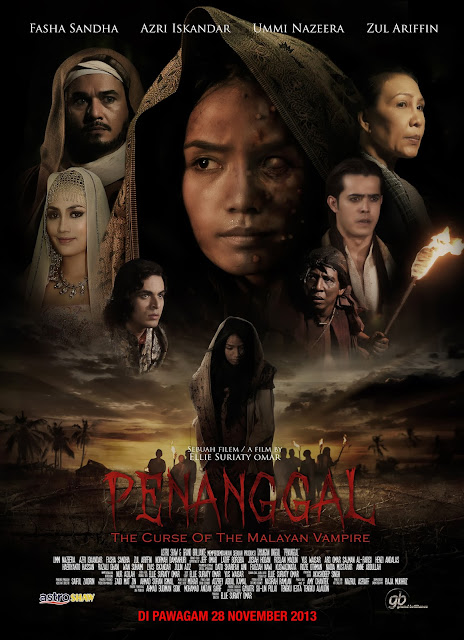 The poster of the first film that Eille as film director 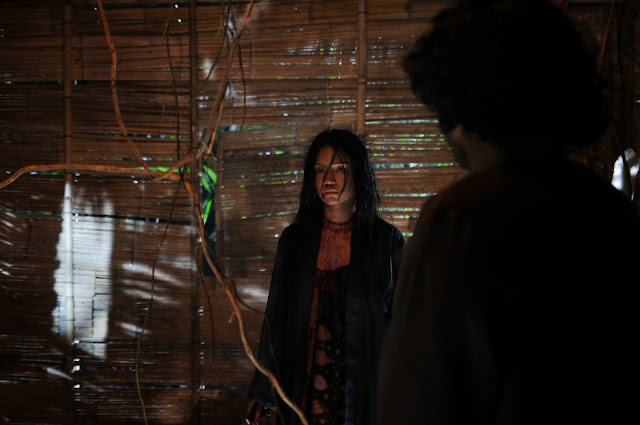 A scene from Penanggal ... UmmiNazeera plays the lead role as Murni 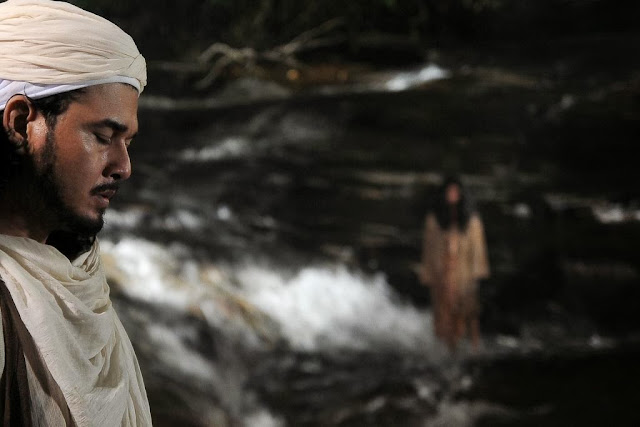 A scene from Penanggal ... Syed Yusof ( played byAzri  Iskandar )  tries to convince Murni to walk the right road.
Posted by Bissme at 9:07 PM No comments: