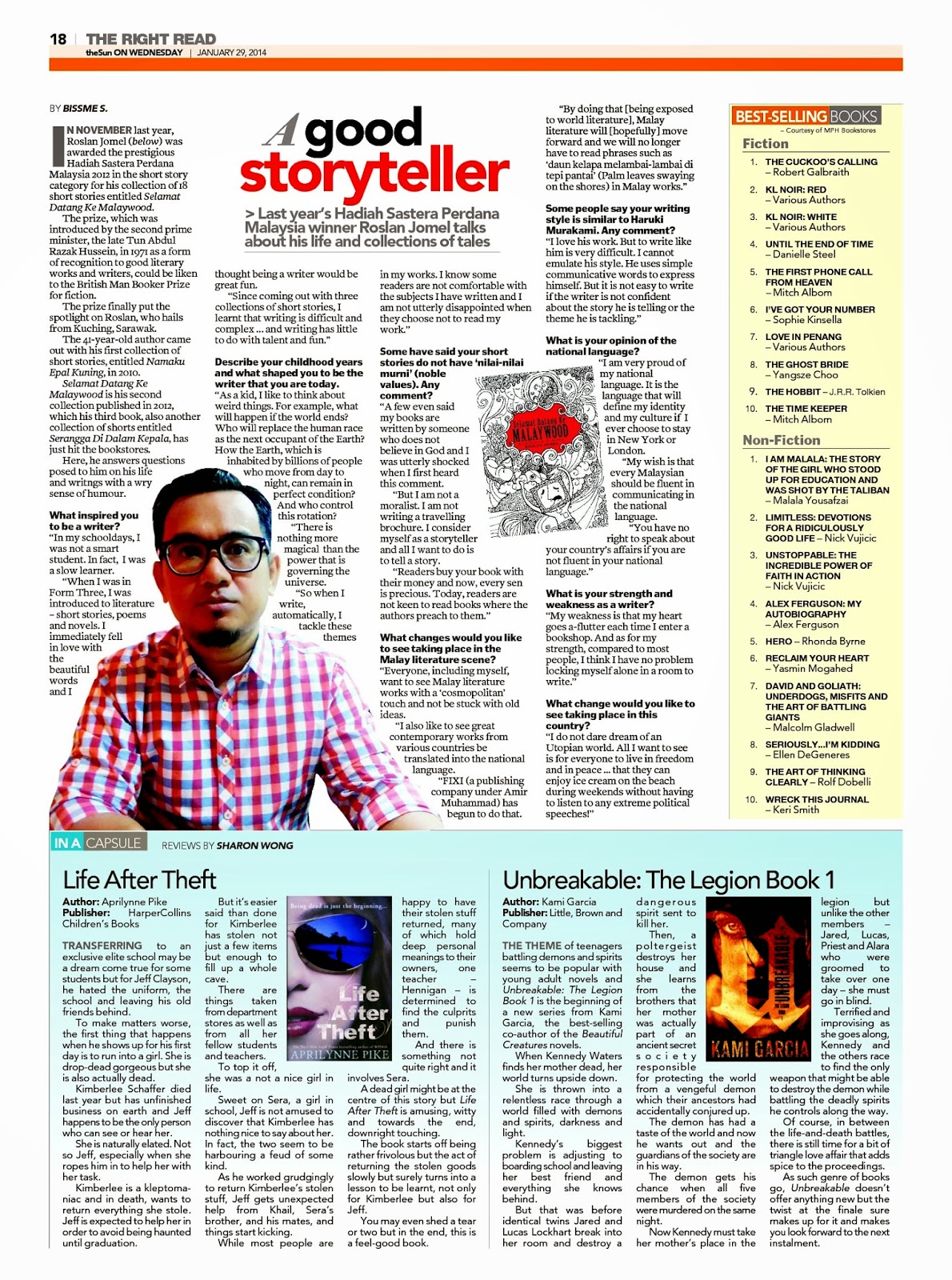 I did an interview with author Roslan Jomel.  I have enjoyed reading his book Selamat Datang Ke Malaywood that highlight a collection of his short stories. My persona favorite story from the collection is Lelaki Yang Menetak Anaknya...

In November last year,Roslan Jomelwas awarded the prestigious Hadiah Sastera Perdana Malaysia 2012 in the short story category for his collection of 18 short stories entitled Selamat Datang Ke Malaywood. The prize, which was introduced by the second prime minister, the late Tun Abdul Razak Hussein, in 1971 as a form of recognition to good literary works and writers, could be liken to the British Man Booker Prize for fiction. The prize finally put the spotlight on Roslan, who hails from Kuching, Sarawak. The 41-year-old author came out with his first collection of short stories, entitled Namaku Epal Kuning, in 2010. Selamat Datang Ke Malaywood is his second collection published in 2012 and his third book, also another collection of shorts entitled Serangga Di Dalam Kepala, has just hit the bookstores. Here, he answers questions posed to him on his life and writngs with a wry sense of humour.

*What inspired you to be a writer?

In my schooldays, I was not a smart student. In fact, I was a slow learner.When I was in Form Three, I was introduced to literature – short stories, poems and novels. I immediately fell in love with the beautiful words and I thought being a writer would be great fun. Since coming out with three collections of short stories, I learnt that writing is difficult and complex … and writing has little to do with talent and fun.

*Describe your childhood years and what shaped you to be the writer that you are today.

As a kid, I like to think about weird things. For example, what will happen if the world ends? Who will replace the human race as the next occupant of the Earth? How the Earth, which is inhabited by billions of people who move from day to night, can remain in perfect condition? And who control this rotation?
There is nothing more magical than the power that is governing the universe.So when I write, automatically, I tackle these themes in my works. I know some readers are not comfortable with
the subjects I have written and I am not utterly disappointed when they choose not to read my work.

* Some have said your short stories do not have ‘nilai-nilai murni’ (noble values). Any comment?

A few even said my books are written by someone who does not believe in God and I was utterly shocked when I first heard this comment.But I am not a moralist. I am not writing a travelling brochure.I consider myself as a storyteller and all I want to do is to tell a story. Readers buy your book with their money and now, every sen is precious. Today, readers are not keen to read books where the authors preach to them.

* What changes would you like to see taking place in the Malay literature scene?

Everyone, including myself, want to see Malay literature works with a ‘cosmopolitan’ touch and not be stuck with old ideas. I also like to see great contemporary works from various countries be translated into the national language.
FIXI (a publishing company under Amir Muhammad) has begun to do that. By doing that [being exposed to world literature], Malay literature will [hopefully] move forward and we will no longer have to read phrases such as daun kelapa melambai-lambai di tepi pantai’ (Palm leaves swaying on the shores) in Malay works.”

* Some people say your writing style is similar to Haruki Murakami. Any comment?

I love his work. But to write like him is very difficult. I cannot emulate his style. He uses simple communicative words to express himself. But it is not easy to write if the writer is not confident about the story he is telling or the theme he is tackling.

* What is your opinion of the national language?

* What is your strength and weakness as a writer?

My weakness is that my heart goes a-flutter each time I enter a bookshop. And as for my strength, compared to most people, I think I have no problem locking myself alone in a room to
write.

* What change would you like to see taking place in this country?

I do not dare dream of an Utopian world. All I want to see is for everyone to live in freedom and in peace ... that they can enjoy ice cream on the beach during weekends without having to listen to any extreme political speeches! 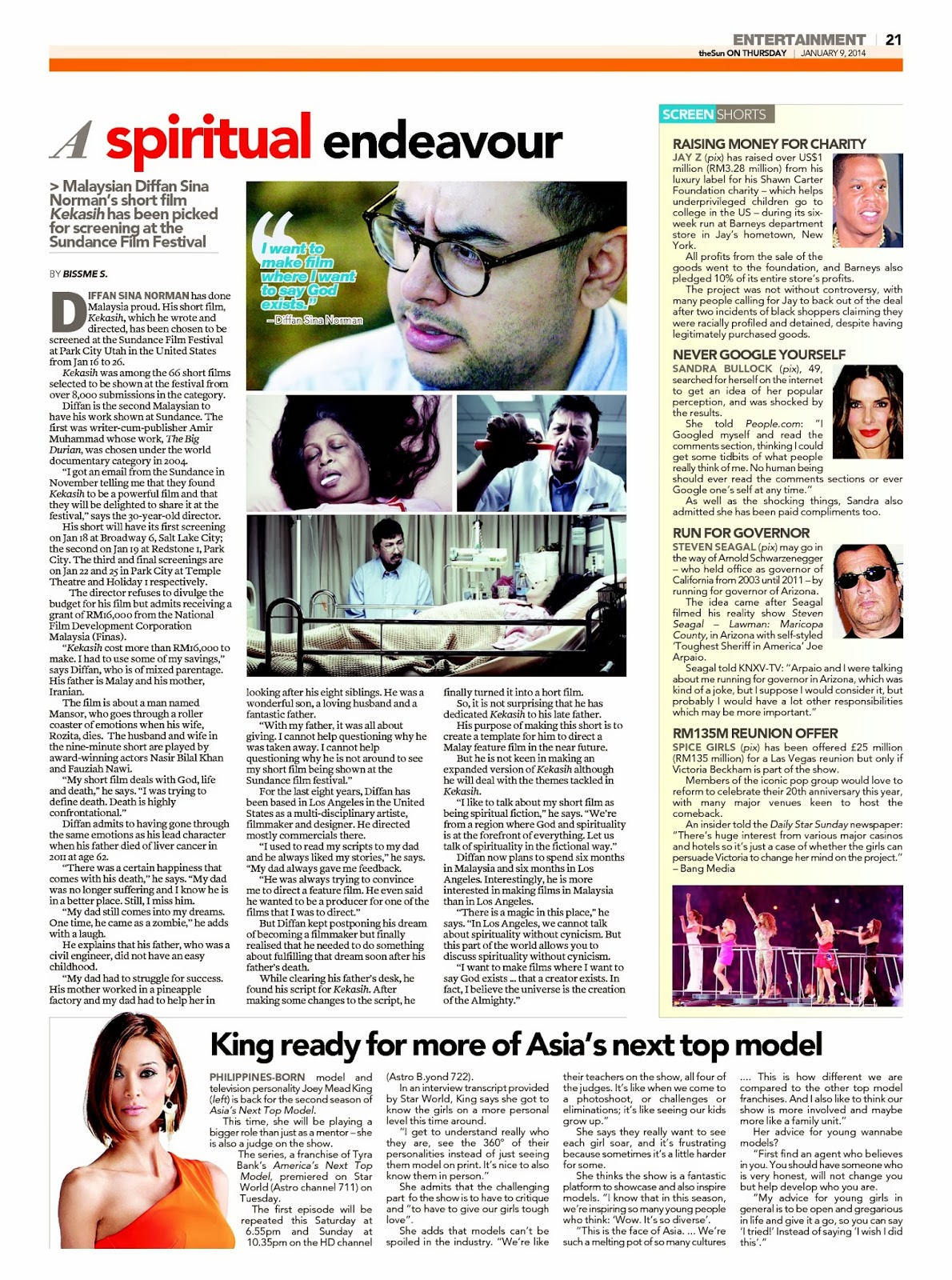 My first post for 2014 will be on  Malaysian Diffan Sina Norman who makes a short film titled Kekasih that has been chosen to be screened at the prestigious Sundance Film Festival ( starting from Jan 16 to Jan 26)  The story appears in theSun today.   Here is the full interview ...

DIFFAN SINA NORMAN has done Malaysia proud. His short film,Kekasih, which he wrote and directed, has been chosen to be screened at the Sundance Film Festival at Park City Utah in the United States from Jan 16 to 26. Kekasih was among the 66 short films selected to be shown at the festival from over 8,000 submissions in the category.Diffan is the second Malaysian to have his work shown at Sundance. The first was writer-cum-publisher Amir Muhammad whose work, The Big Durian, was chosen under the world documentary category in 2003.
“I got an email from the Sundance in November telling me that they found Kekasih to be a powerful film and that they will be delighted to share it at the festival,” says the 30-year-old director.
His short will have its first screening on Jan 18 at Broadway 6, Salt Lake City, the second on Jan 19 at Redstone 1, Park City. The third and final screenings areon Jan 22 and 25 in Park City at Temple Theatre and Holiday 1 respectively. The director refuses to divulge the budget for his film but admits receiving a grant of RM16,000 from the National Film Development Corporation Malaysia (Finas).
“Kekasih cost more than RM16,000 to make. I had to use some of my savings,” says Diffan, who is of mixed parentage. His father is Malay and his mother, Iranian.
The film is about a man named Mansor, who goes through a roller coaster of emotions when his wife, Rozita, dies. The husband and wife in the nine-minute short are played by award-winning actors Nasir Bilal Khan and Fauziah Nawi.
“My short film deals with God, life and death,” he says. “I was trying to define death. Death is highly confrontational.”
Diffan admits to having gone through the same emotions as his lead character when his father died of liver cancer in 2011 at age 62.
“There was a certain happiness that comes with his death,” he says.
“My dad was no longer suffering and I know he is in a better place. Still, I miss him.My dad still comes into my dreams. One time, he came as a zombie,” he adds with a laugh.
He explains that his father, who was a civil engineer, did not have an easy childhood.
“My dad had to struggle for success. His mother worked in a pineapple factory and my dad had to help her in looking after his eight siblings. He was a  wonderful son, a loving husband and a


fantastic father.
“With my father, it was all about giving. I cannot help questioning why he was taken away. I cannot help questioning why he is not around to see my short film being shown at the Sundance film festival.”
For the last eight years, Diffan has been based in Los Angeles in the United States as a multi-disciplinary artiste,filmmaker and designer. He directed mostly commercials there.
“I used to read my scripts to my dad and he always liked my stories,” he says.
“My dad always gave me feedback.He was always trying to convince me to direct a feature film. He even said he wanted to be a producer for one of the films that I was to direct.”
But Diffan kept postponing his dream of becoming a filmmaker but finally realised that he needed to do something about fulfilling that dream soon after his father’s death. While clearing his father’s desk, he found his script for Kekasih. After making some changes to the script, he finally turned it into a short film. So, it is not surprising that he has dedicated Kekasih to his late father.
His purpose of making this short is to create a template for him to direct a Malay feature film in the near future. But he is not keen in making an expanded version of Kekasih although he will deal with the themes tackled in Kekasih.
“I like to talk about my short film as being spiritual fiction,” he says.
“We’re from a region where God and spirituality is at the forefront of everything. Let us talk of spirituality in the fictional way.”
Diffan now plans to spend six months in Malaysia and six months in Los Angeles. Interestingly, he is more interested in making films in Malaysia than in Los Angeles.
“There is a magic in this place,” he says.
“In Los Angeles, we cannot talk about spirituality without cynicism. But this part of the world allows you to discuss
spirituality without cynicism.
“I want to make films where I want to say God exists ... that a creator exists. In fact, I believe the universe is the creation of the Almighty."