Today theSun  highlights an interview with the author Shaz Johar who  is promoting his fifth fiction novel that will be selling Pesta Buku Antrabangsa  Kuala Lumpur at Putra World Trade Centre ( PWTC) starting today till May 4.   Below the is the full article.

Author Shaz Johar tackles the theme of cults in his latest novel, Sanctuaria (published under Fixi).The  2011 winner of the Selangor Young Talent Award for best Malay  novel, who made his debut on the local literary scene with Kougar, is no stranger to controversial subject matters. Kougar explored not only the romance between a much older woman and a youngerman but also touched on the subject of religion, sex, passion and friendship.
His current book is a story of the once idealistic Yang Ariff who builds his version of a utopian community in an isolated commune called Sanctuaria, where everyone is treated equally. Over time, Sanctuaria grows to become a 200-member commune and then, the story takes a dark turn when Yang Ariff becomes consumed by power and his utopia turns into a cult.
“His intentions started out as noble,” said the 36-year-old Shaz whose real name is Mohd Aswan Md Johar.
“But as his commune grew bigger,Yang Ariff becomes power crazy and wants everyone in Sanctuaria to obey him at all cost, threatening to kill anyone who dares to leave.”
Shaz, from Kuala Lumpur,Jones,was inspired by the biopic on Jim an American religious leader who founded a new religious movement called The People’s Temple of the Disciples of Christ. On Nov 18, 1978, Jones allegedly ordered more than 900 cult members, including over 300 children, to commit suicide by ingesting a cyanide-laced drink, in what is now commonly called “Jonestown” in Guyana. Jones shot himself.
Sanctuaria is Shaz’s fifth novel. He is currently working on his sixth, which also tackles a
controversial theme.
“I am exploring the subject of paedophilia,” said Shaz, who was rather tight-lipped over the
outcome of the story, except to say that it’s a story about a woman who forges a friendship
with a young boy who is being sexually molested by his adoptive father.
The woman herself is an ex convict who was imprisoned for killing her abusive husband. Shaz started writing at the age of 16. He would show his short stories to his friends for feedback.
He said: “I always love reading fiction more than non-fiction. In fiction, writers tell the truth in a more colourful way.”
He has since quit his job in customer service at a bank to focus on writing. His other works of fiction include Tabu, a story of a plussized Malay woman falling in love with an African man, and Mental – about a maid who works for an eccentric family, as well as a compilation of 22 short stories entitled Cerpen by Shaz Johar.
Shaz is unfazed by the criticisms of those who find his books too raunchy.
“There is nothing wrong in writing about sex because sex is part of life,” he said.
Sanctuaria will be officially on sale at the Pesta Buku Antrabangsa Kuala Lumpur at Putra World Trade Centre (PWTC), which starts from tomorrow till May 4. Shaz will be on hand for several book signings and talks on the book during that period. For details on that, visit the Sanctuaria Facebook.

Posted by Bissme at 8:33 PM No comments: 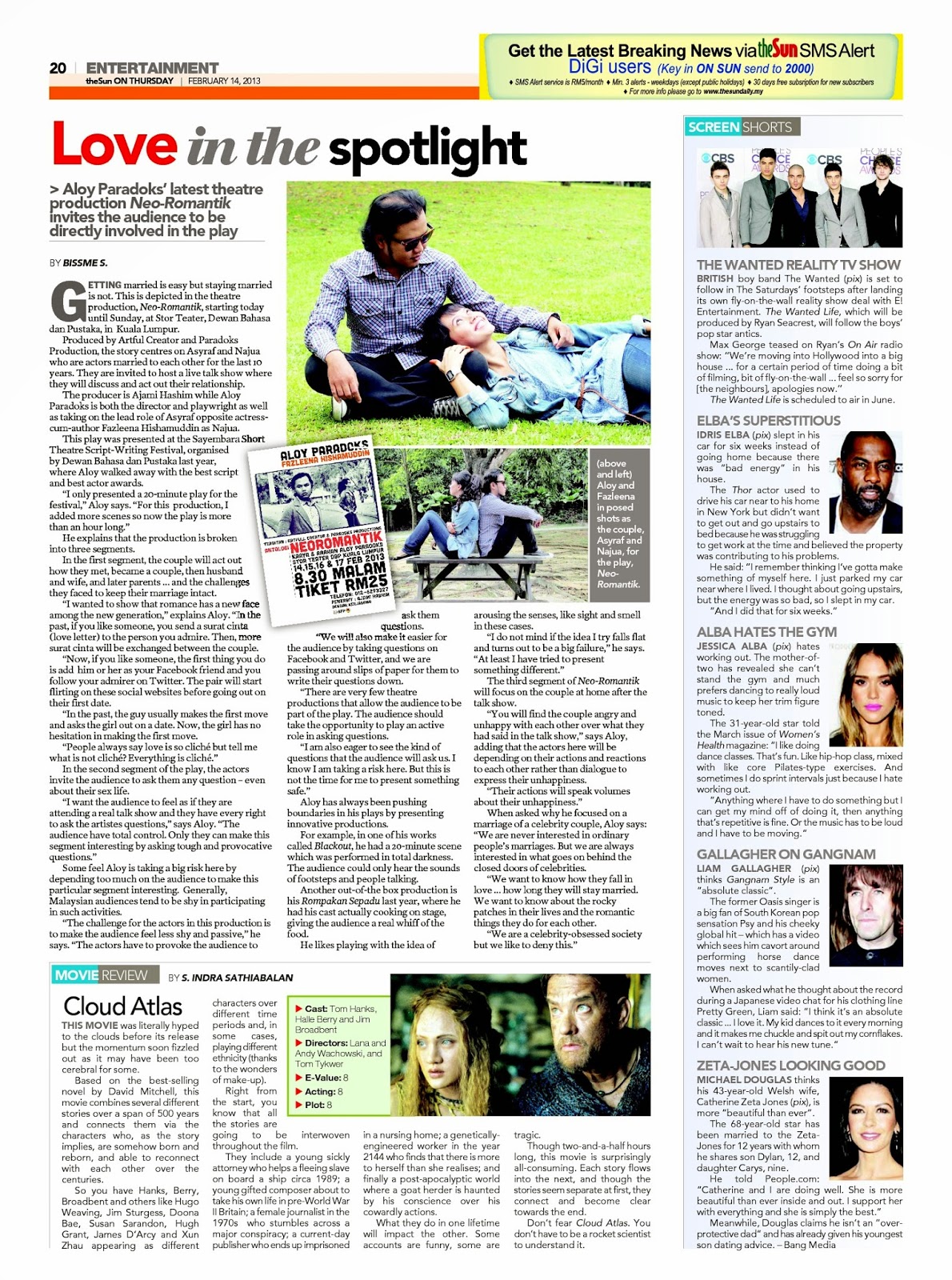 Today I am highlight an interview with Aloy Paradoks when he did stage production called Neo Romantik last year.  He has given some interesting answers to the question I had posed to him.  There is a strong talk he might want to restage this production again   This interview appeared in theSun on Feb 14 2013.


Headline: Love In the Spotlight
By Bissme S

Getting  married is easy but staying married is not. This is depicted in the theatre production, Neo-Romantik, starting today until Sunday, at Stor Teater, Dewan Bahasa dan Pustaka, in Kuala Lumpur. Produced by Artful Creator and Paradoks Production, the story centres on Asyraf and  Najua who are actors married to each other for the last 10 years. They are invited to host a  live talk show where they will discuss and act out their relationship.
The producer is Ajami Hashim while Aloy Paradoks is both the director and playwright as well as taking on the lead role of Asyraf opposite actress cum-author Fazleena Hishamuddin as Najua.
This play was presented at the Sayembara Short Theatre Script-Writing Festival, organised by Dewan Bahasa dan Pustaka last year,where Aloy walked away with the best script and best actor awards.
“I only presented a 20-minute play for the festival,” Aloy says. “For this production, I added more scenes so now the play is more than an hour long.”
He explains that the production is broken into three segments. In the first segment, the couple will act out how they met, became a couple, then husband and wife, and later parents … and the
challengesthey faced to keep their marriage intact.
“I wanted to show that romance has a new face among the new generation,” explains Aloy.
“In the past, if you like someone, you send a surat cinta (love letter) to the person you admire. Then, more surat cinta will be exchanged between the couple.
“Now, if you like someone, the first thing you do is add him or her as your Facebook friend and  you follow your admirer on Twitter. The pair will start flirting on these social websites before  going out on their first date.
“In the past, the guy usually makes the first move and asks the girl out on a date. Now, the girl has no hesitation in making the first move.
“People always say love is so cliché but tell me what is not cliché? Everything is cliché.”
In the second segment of the play, the actors invite the audience to ask them any question – even about their sex life.
“I want the audience to feel as if they are attending a real talk show and they have every right to ask the artistes questions,” says Aloy.
“The audience have total control. Only they can make this segment interesting by asking tough  and provocative questions.”
Some feel Aloy is taking a big risk here by depending too much on the audience to make this particular segment interesting. Generally, Malaysian audiences tend to be shy in participating
in such activities.
“The challenge for the actors in this production is to make the audience feel less shy and passive,” he says.
“The actors have to provoke the audience to ask them questions. We will also make it easier for the audience by taking questions on Facebook and Twitter, and we are passing around slips of  paper for them to write their questions down.
“There are very few theatre productions that allow the audience to be part of the play. The  audience should take the opportunity to play an active role in asking questions.
“I am also eager to see the kind of questions that the audience will ask us. I know I am taking a risk here. But this is not the time for me to present something safe.”
Aloy has always been pushing boundaries in his plays by presenting innovative productions. For example, in one of his works called Blackout, he had a 20-minute scene which was performed  in total darkness. The audience could only hear the sounds of footsteps and people talking.
Another out-of-the box production is his Rompakan Sepadu last year, where he had his cast actually cooking on stage,giving the audience a real whiff of the food. He likes playing with the idea of arousing the senses, like sight and smell in these cases.
“I do not mind if the idea I try falls flat and turns out to be a big failure,” he says.
“At least I have tried to present something different.”
The third segment of Neo-Romantik will focus on the couple at home after the talk show.
“You will find the couple angry and unhappy with each other over what they had said in the talk show,” says Aloy, adding that the actors here will be depending on their actions and reactions
to each other rather than dialogue to express their unhappiness.
“Their actions will speak volumes about their unhappiness.”
When asked why he focused on a marriage of a celebrity couple, Aloy says: “We are never interested in ordinary people’s marriages. But we are always interested in what goes on behind  the closed doors of celebrities. We want to know how they fall in love … how long they will stay married. We want to know about  the rocky patches in their lives and the romantic things they do for each other.
“We are a celebrity-obsessed society but we like to deny this."