Raj of the East 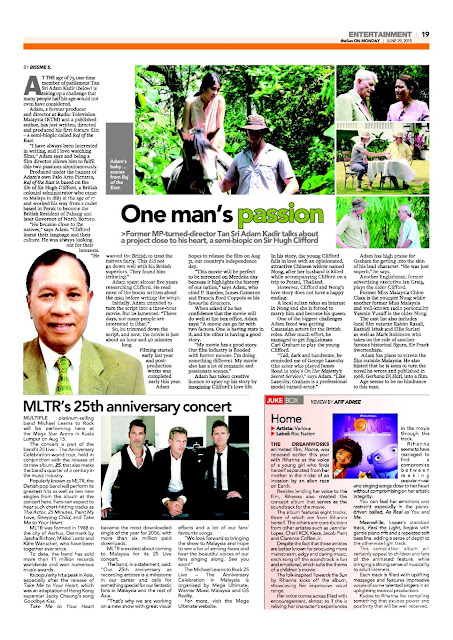 Today theSun published my interview with Tan Sri Adam Kadir who is directing his first feature film. Here is the full interview

One man’s passion
By Bissme S

AT THE age of 73, one-time member of parliament Tan Sri Adam Kadir (below) is taking up a challenge that many people half his age would not even have considered. Adam, a former producer and director at Radio Television Malaysia (RTM) and a published author, has just written, directed and produced his first feature film – a semi-biopic called Raj of the East.
“I have always been  interested in  writing, and I love watching films,” Adam says and being a film director allows him to fulfil this two passions simultaneously.
Produced under the  banner of Adam’s own Palo Arto Pictures, Raj of the East is based on the life of Sir Hugh Clifford, a British colonial administrator who came to  Malaya in 1883 at the age of 17 and worked his way from a cadet based in Perak to become the British Resident of Pahang and later Governor of North Borneo.“He became close to the natives,” says Adam. “Clifford learnt their language and their culture.
He was always looking out for their interests. “He wanted the British to treat the natives fairly. This did not go down well with his  British superiors. They found him irritating.”  Adam spent almost five years  researching Clifford.
He read most of the books  written about the man  before writing the script. Initially, Adam intended to turn the script into a three-hour movie. But he lamented: “These days, not many people are  interested in [that]”. So, he trimmed down the script, and now, the movie is just about an hour and 40 minutes long. Filming started early last year and post-production works was completed early this year. Adam hopes to release the film on Aug 31, our country’s independence day.“This movie will be  perfect to be screened on Merdeka day because it highlights the history of our nation,” says Adam, who cited P. Ramlee, James Cameron and Francis Ford Coppola as his favourite directors.  When asked if he has  confidence that the movie will do well at the box office, Adam says: “A movie can go far with two factors.
One is having stars in it, and the other is having a good story. “My movie has a good story. Our film industry is flooded with  horror movies. I’m doing something  different. My movie also has a lot of  romantic and passionate scenes.” Adam has taken creative licence to spice up his story by imagining Clifford’s love life. In his story, the young Clifford falls in love with an opinionated, attractive Chinese widow named Nong, after her husband is killed while  accompanying Clifford on a trip to Petani, Thailand.
However, Clifford and Nong’s love story does not have a happy ending. A local  sultan takes an interest in Nong and she is forced to marry him and become his queen. One of the biggest challenges Adam faced was getting Caucasian actors for the British roles. After much effort, he managed to get Englishman Carl Graham to play the young Clifford. “Tall, dark and handsome, he reminded me of George  Lazenby (the actor who played James Bond in 1969’s On Her  Majesty’s Secret Service),” says Adam. “Like Lazenby, Graham is a professional model-turned- actor.” Adam has high praise for Graham for getting into the skin of his lead character. “He was just superb,” he says.
Another Englishman, former  advertising executive Ian Graig, plays the older  Clifford. Former Miss Malaysia Chloe Chan is the younger Nong while another former Miss Malaysia and well-known  radio  personality Yasmin Yusuff is the older Nong.  The cast list also includes local film  veteran Rahim Razali, Rashidi Ishak and  Ellie Suriati as well as Mark Robinson who takes on the role of another famous historical figure, Sir Frank Swettenham.  Adam has plans to screen the film outside Malaysia. He also hinted that he is keen to turn the novel he wrote and published in 1968, Gerhana Di Hati, into a film. Age seems to be no hindrance to this man.

Posted by Bissme at 2:36 AM No comments: 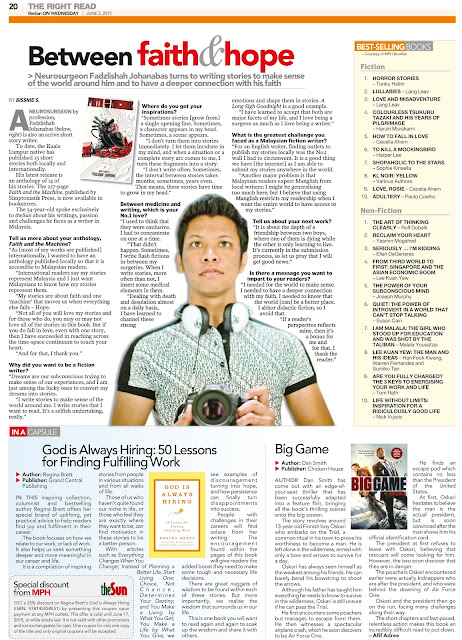 Today theSun published my interview with Fadzlishah Johanabas who has produced an anthology of short stories titled Faith and The Machine, published by Simptomatik Press. Here is the full interview

A Neurosurgeon by profession, Fadzlishah Johanabas is also an active short story writer.To date, the Kuala
Lumpur native has published 25 short stories both locally and internationally.His latest release is an  anthology of 14 of his stories. The 227-page Faith and the Machine, published by Simptomatik Press, is now available in bookstores.The 34-year-old spoke exclusively to theSun about his writings, passion and challenges he faces as a writer in Malaysia.

*Tell us more about your anthology, Faith and the Machine?

“As [most of my works are published] internationally, I wanted to have an anthology published locally so that it is accessible to Malaysian readers. International readers say my stories represent Malaysia and I just want Malaysians to know how my stories represent them.
“My stories are about faith and one ‘machine’ that moves us when everything else fails – Hope. Not all of you will love my stories and for those who do, you may or may not love all of the stories in this book. But if you do fall in love, even with one story, then I have succeeded in reaching across the time-space continuum to touch your heart. And for that, I thank you.”

*Why did you want to be a fiction writer?

* Where do you get your inspirations?

“Sometimes stories [grow from] a single opening line. Sometimes, a character appears in my head. Sometimes, a scene appears. I don’t turn them into stories immediately. I let them incubate in my mind, and when a situation or a complete story arc comes to me, I turn these fragments into a story.I don’t write often. Sometimes,
the interval between stories takes months; sometimes, years even. That means, these stories have time to grow in my head.”

*Between medicine and writing, which is your No.1 love?

“I used to think that they were exclusive. I had to concentrate on one at a time. That didn’t happen. Sometimes, I write flash fictions in-between my surgeries. When I write stories, more often than not, I insert some medical elements in them. Dealing with death and desolation almost on a daily basis, I have learned to channel these strong emotions and shape them in stories. A Long Sigh Goodnight is a good example. I have learned to accept that both are major facets of my life, and I love being a surgeon as much as I love being a writer.”

*What is the greatest challenge you faced as a Malaysian fiction writer?

“For an English writer, finding outlets to publish my stories locally was the No.1 wall I had to circumvent. It is a good thing we have [the internet] as I am able to submit my stories anywhere in the world.
Another major problem is that Malaysian readers expect Manglish from local writers; I might be generalising too much here, but I believe that using Manglish restricts my readership when I want the entire world to have access to my stories.”

*Tell us about your next work?

“It is about the depth of a friendship between two boys, where one of them is dying while the other is only learning to live. It’s currently in the submission process, so let us pray that I will get good news.”

* Is there a message you want to impart to your readers?

“I needed for the world to make sense.I needed to have a deeper connection with my faith. I needed to know that the world [can] be a better place. I abhor didactic fiction, so I avoid that.If a reader’s perspective reflects mine, then it’s a bonus for me and for that, I thank the reader.”

Posted by Bissme at 6:26 AM No comments: