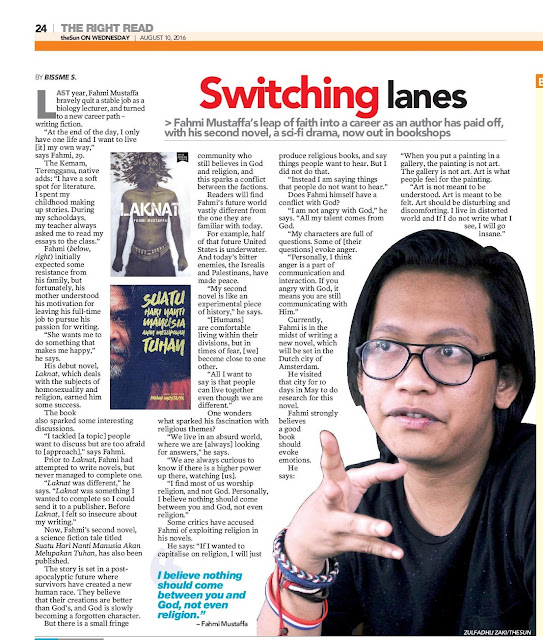 Last year, Fahmi Mustaffa bravely quit a stable job as a biology lecturer, and turned to a new career path – writing fiction.
“At the end of the day, I only have one life and I want to live [it] my own way,” says Fahmi, 29.
The Kemam, Terengganu, native adds: “I have a soft spot for literature. I spent my childhood making up stories. During my schooldays, my teacher always asked me to read my essays to the class.”
Fahmi initially expected some resistance from his family, but fortunately, his mother understood his motivation for leaving his full-time job to pursue his passion for writing.
“She wants me to do something that makes me happy,” he says.
His debut novel, Laknat, which deals with the subjects of homosexuality and religion, earned him some success. The book also sparked some interesting discussions.
“I tackled [a topic] people want to discuss but are too afraid to [approach],” says Fahmi.
Prior to Laknat, Fahmi had attempted to write novels, but never managed to complete one.
“Laknat was different,” he says.
“Laknat was something I wanted to complete so I could send it to a publisher. Before Laknat, I felt so insecure about my writing.” Now, Fahmi’s second novel, a science fiction tale titled Suatu Hari Nanti Manusia Akan Melupakan Tuhan, has also been published. The story is set in a postapocalyptic future where survivors have created a new human race. They believe that their creations are better than God’s, and God is slowly becoming a forgotten character. But there is a small fringe community who still believes in God and religion, and this sparks a conflict between the factions. Readers will find Fahmi’s future world vastly different from the one they are familiar with today. For example, half of that future United States is underwater. And today’s bitter enemies, the Isrealis and Palestinans, have made peace.
“My second novel is like an experimental piece of history,” he says. “[Humans] are comfortable living within their divisions, but in times of fear, [we] become close to one other.
“All I want to say is that people can live together even though we are different.”
One wonders what sparked his fascination with religious themes? “We live in an absurd world, where we are [always] looking for answers,” he says.
“We are always curious to know if there is a higher power up there, watching [us]. “I find most of us worship religion, and not God. Personally, I believe nothing should come between you and God, not even religion.”
Some critics have accused Fahmi of exploiting religion in his novels. He says: “If I wanted to capitalise on religion, I will just
produce religious books, and say things people want to hear. But I did not do that. Instead I am saying things that people do not want to hear.”
Does Fahmi himself have a conflict with God?
“I am not angry with God,” he says.
“All my talent comes from God. “My characters are full of questions. Some of [their questions] evoke anger. Personally, I think anger is a part of communication and interaction. If you angry with God, it means you are still communicating with Him.” Currently, Fahmi is in the midst of writing a new novel, which will be set in the Dutch city of Amsterdam. He visited that city for 10 days in May to do research for this novel.
Fahmi strongly believes a good book should evoke emotions. He says: “When you put a painting in a gallery, the painting is not art. The gallery is not art. Art is what people feel for the painting. “Art is not meant to be understood. Art is meant to be felt. Art should be disturbing and discomforting. I live in distorted world and If I do not write what I see, I will go insane."

Below is  Fahmi with his books covers 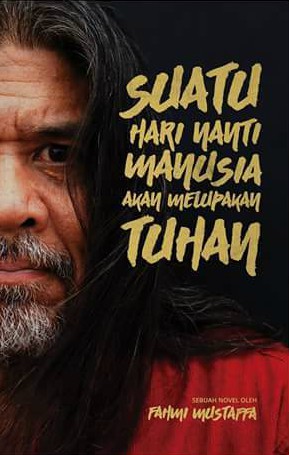 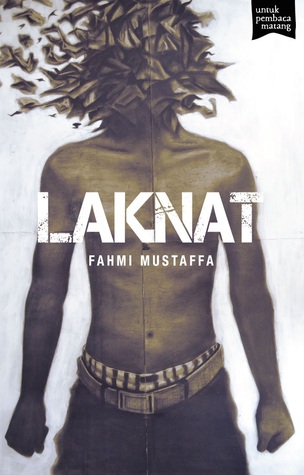