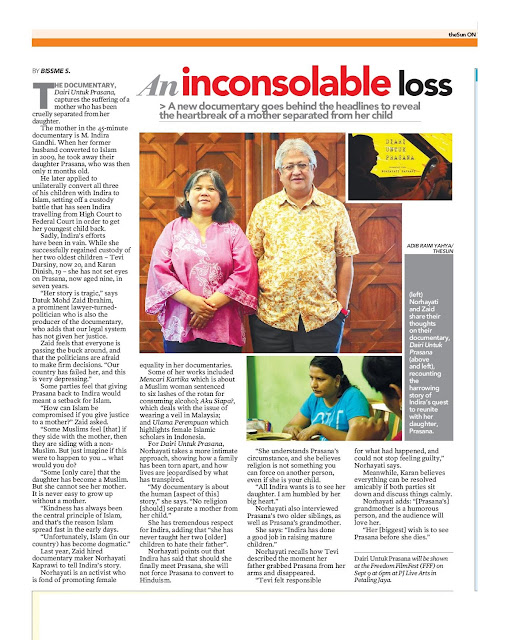 I interviewed Norhayat Kaprawi who is doing a documentary on M Indira Ghandhi, a mother who has been cruelly separated from her daughter. Read the full story below

THE DOCUMENTARY, Dairi Untuk Prasana, captures the suffering of a mother who has been cruelly separated from her daughter. The mother in the 45-minute documentary is M. Indira Gandhi.
When her former husband converted to Islam in 2009, he took away their daughter Prasana, who was then only 11 months old. He later applied to unilaterally convert all three of his children with Indira to Islam, setting off a custody battle that has seen Indira travelling from High Court to Federal Court in order to get her youngest child back. Sadly, Indira’s efforts have been in vain. While she successfully regained custody of her two oldest children – Tevi Darsiny, now 20, and Karan Dinish, 19 – she has not set eyes on Prasana, now aged nine, in seven years.
“Her story is tragic,” says Datuk Mohd Zaid Ibrahim, a prominent lawyer-turnedpolitician who is also the producer of the documentary, who adds that our legal system has not given her justice.
Zaid feels that everyone is passing the buck around, and that the politicians are afraid to make firm decisions.
“Our country has failed her, and this is very depressing.”
Some parties feel that giving Prasana back to Indira would meant a setback for Islam. “How can Islam be compromised if you give justice to a mother?” Zaid asked.
“Some Muslims feel [that] if they side with the mother, then they are siding with a nonMuslim. But just imagine if this were to happen to you ... what would you do?
“Some [only care] that the daughter has become a Muslim. But she cannot see her mother. It is never easy to grow up without a mother. Kindness has always been the central principle of Islam, and that’s the reason Islam spread fast in the early days. “Unfortunately, Islam (in our country) has become dogmatic.”
Last year, Zaid hired documentary maker Norhayati Kaprawi to tell Indira’s story. Norhayati is an activist who is fond of promoting female equality in her documentaries. Some of her works included Mencari Kartika which is about a Muslim woman sentenced to six lashes of the rotan for consuming alcohol; Aku Siapa?, which deals with the issue of wearing a veil in Malaysia; and Ulama Perempuan which highlights female Islamic scholars in Indonesia.
For Dairi Untuk Prasana, Norhayati takes a more intimate approach, showing how a family has been torn apart, and how lives are jeopardised by what has transpired.
“My documentary is about the human [aspect of this] story,” she says.
“No religion [should] separate a mother from her child.”
She has tremendous respect for Indira, adding that “she has never taught her two [older] children to hate their father”.
Norhayati points out that Indira has said that should she finally meet Prasana, she will not force Prasana to convert to Hinduism.

“She understands Prasana’s circumstance, and she believes religion is not something you can force on another person, even if she is your child.
“All Indira wants is to see her daughter. I am humbled by her big heart.”
Norhayati also interviewed Prasana’s two older siblings, as well as Prasana’s grandmother. She says: “Indira has done a good job in raising mature children.”
Norhayati recalls how Tevi described the moment her father grabbed Prasana from her arms and disappeared.
“Tevi felt responsible for what had happened, and could not stop feeling guilty,” Norhayati says.
Meanwhile, Karan believes everything can be resolved amicably if both parties sit down and discuss things calmly.
Norhayati adds: “[Prasana’s] grandmother is a humorous person, and the audience will love her. Her [biggest] wish is to see Prasana before she dies.”

Footnote : Dairi Untuk Prasana will be shown at the Freedom FilmFest (FFF) on Sept 9 at 6pm at PJ Live Arts in Petaling Jaya.
Posted by Bissme at 6:05 PM