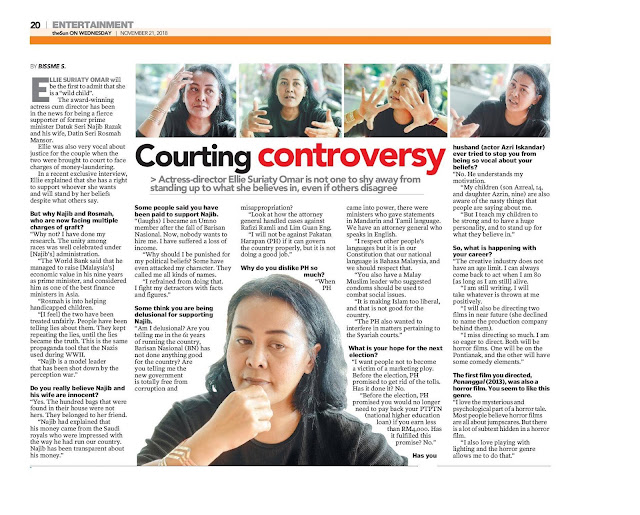 The award winning actress and director  Ellie Suriaty Omar talks theSun about why she is supporting the former Prime  Minister  Datuk Seri Najib Razak and his wife, Datin Seri Rosmah Mansor,  through their crisis and her aspiration to direct two more horror movie


Question : Why Najib and Rosmah, who are now facing multiple charges of graft?

Why not? I have done my research. The unity among races was well celebrated under [Najib’s] administration. The World Bank said that he managed to raise [Malaysia’s] economic value in his nine years as prime minister, and considered him as one of the best finance ministers in Asia.
Rosmah is into helping handicapped children. [I feel] the two have been treated unfairly. People have been telling lies about them. They kept repeating the lies, until the lies became the truth.
This is the same propaganda tool that the Nazis used during WWII. Najib is a model leader that has been shot down by the perception war.


* Do you really believe Najib and his wife are innocent?

Yes. The hundred bags that were found in their house were not hers. They belonged to her friend. Najib had explained that his money came from the Saudi royals who were impressed with the way he had run our country. Najib has been transparent about his money.

*Some people said you have been paid to support Najib.

(Laughs) I became an Umno member after the fall of Barisan Nasional. Now, nobody wants to hire me. I have suffered a loss of income.
Why should I be punished for my political beliefs?
Some have even attacked my character. They called me all kinds of names. I refrained from doing that. I fight my detractors with facts and figures.

* Some think you are being delusional for supporting Najib.

Am I delusional? Are you telling me in the 61 years of running the country, Barisan Nasional (BN) has not done anything good for the country? Are you telling me the new government is totally free from corruption and misappropriation?
Look at how the attorney general handled cases against Rafizi Ramli and Lim Guan Eng. “I will not be against Pakatan Harapan (PH) if it can govern the country properly, but it is not doing a good job.

Why do you dislike PH so much?

When PH  came into power, there were ministers who gave statements in Mandarin and Tamil language. We have an attorney general who speaks in English.
I respect other people’s languages but it is in our Constitution that our national language is Bahasa Malaysia, and we should respect that.
You also have a Malay Muslim leader who suggested condoms should be used to combat social issues. It is making Islam too liberal, and that is not good for the country. The PH also wanted to interfere in matters pertaining to the Syariah courts.

* What is your hope for the next election?

*Has you husband (actor Azri Iskandar) ever tried to stop you from being so vocal about your beliefs?

No. He understands my motivation. My children (son Azreal, 14, and daughter Azrin, nine) are also aware of the nasty things that people are saying about me.
But I teach my children to be strong and to have a huge personality, and to stand up for what they believe in.

*So, what is happening with your career?

The creative industry does not have an age limit. I can always come back to act when I am 80 [as long as I am still] alive. I am still writing. I will take whatever is thrown at me positively. I will also be directing two films in near future (she declined to name the production company behind them).
I miss directing so much. I am so eager to direct. Both will be horror films. One will be on the Pontianak, and the other will have some comedy elements.

*The first film you directed, Penanggal (2013), was also a horror film. You seem to like this genre.


I love the mysterious and psychological part of a horror tale. Most people believe horror films are all about jumps scares. But there is a lot of subtext hidden in a horror film. I also love playing with lighting and the horror genre allows me to do that. 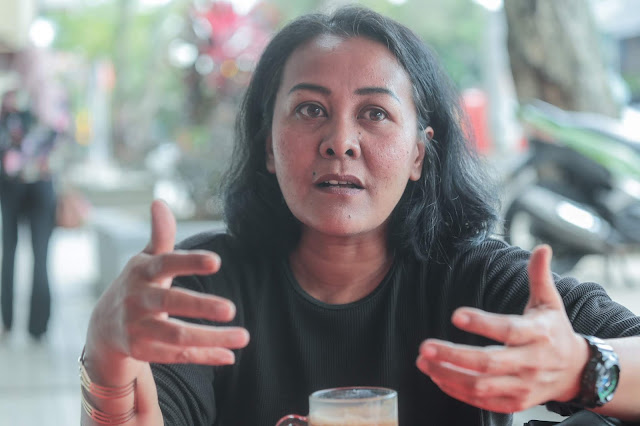 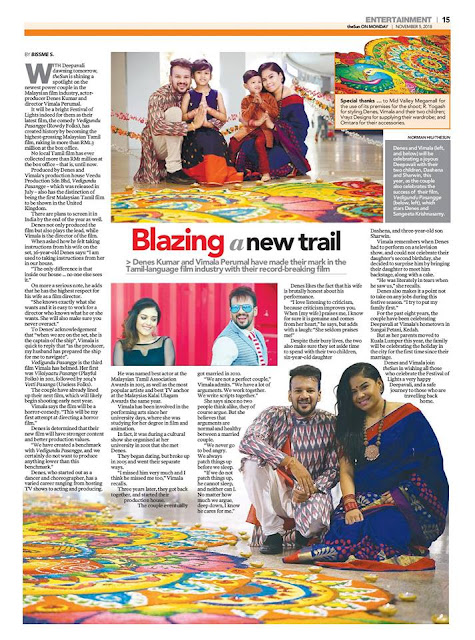 Today theSun feature my interview with producer and actor Denes Kumar and his wife a film director Vimala Perumal .... where they talk about their career, their married life and their deepavali celebration. Read the full story below


WITH Deepavali dawning tomorrow, theSun is shining a spotlight on the newest power couple in the Malaysian film industry, actor producer Denes Kumar and director Vimala Perumal.
It will be a bright Festival of Lights indeed for them as their latest film, the comedy Vedigundu Pasangge (Rowdy Folks), has created history by becoming the highest-grossing Malaysian Tamil film, raking in more than RM1.3 million at the box office.
No local Tamil film has ever collected more than RM1 million at the box office – that is, until now. Produced by Denes and Vimala’s production house Veedu Production Sdn Bhd, Vedigundu Pasangge – which was released in July – also has the distinction of being the first Malaysian Tamil film to be shown in the United Kingdom. There are plans to screen it in India by the end of the year as well. Denes not only produced the film but also plays the lead, while Vimala is the director of the film.
When asked how he felt taking instructions from his wife on the set, 36-year-old Denes says: “I am used to taking instructions from her in our house. “The only difference is that inside our house ... no one else sees it.”
On more a serious note, he adds that he has the highest respect for his wife as a film director.
“She knows exactly what she wants and it is easy to work for a director who knows what he or she wants. She will also make sure you never overact.”
To Denes’ acknowledgement that “when we are on the set, she is the captain of the ship”, Vimala is quick to reply that “as the producer, my husband has prepared the ship for me to navigate”. Vedigundu Pasangge is the third film Vimala has helmed. Her first was Vilaiyaatu Pasange (Playful Folks) in 2011, followed by 2014’s Vetti Pasanga (Useless Folks). The couple have already lined up their next film, which will likely begin shooting early next year. Vimala says the film will be a horror-comedy. “This will be my first attempt at directing a horror film.”
Denes is determined that their new film will have stronger content and better production values.
“We have created a benchmark with Vedigundu Pasangge, and we certainly do not want to produce anything lower than this benchmark.”
Denes, who started out as a dancer and choreographer, has a varied career ranging from hosting TV shows to acting and producing.
Malaysian Tamil Association Awards in 2015, as well as the most popular artiste and best TV anchor at the Malaysias Kalai Ulagam Awards the same year.
Vimala has been involved in the performing arts since her university days, where she was studying for her degree in film and animation.
In fact, it was during a cultural show she organised at her university in 2001 that she met Denes. They began dating, but broke up in 2005 and went their separate ways.
“I missed him very much and I think he missed me too,” Vimala recalls.
Three years later, they got back together, and started their production house. The couple eventuallygot married in 2010.
“We are not a perfect couple,” Vimala admits.
“We have a lot of arguments. We work together. We write scripts together.”
She says since no two people think alike, they of course argue. But she believes that arguments are normal and healthy between a married couple.
“We never go to bed angry. We always patch things up before we sleep. If we do not patch things up, he cannot sleep, and neither can I. No matter how much we argue, deep down, I know he cares for me.”
Denes likes the fact that his wife is brutally honest about his performance.
“I love listening to criticism, because criticism improves you. When [my wife] praises me, I know for sure it is genuine and comes from her heart,” he says, but adds with a laugh: “She seldom praises me!”
Despite their busy lives, the two also make sure they set aside time to spend with their two children, six-year-old daughter
Dashena, and three-year-old son Sharwin.
Vimala remembers when Denes had to perform on a television show, and could not celebrate their daughter’s second birthday, she decided to surprise him by bringing their daughter to meet him backstage, along with a cake.
“He was literately in tears when he saw us,” she recalls.
Denes also makes it a point not to take on any jobs during this festive season.
“I try to put my family first.”
For the past eight years, the couple have been celebrating Deepavali at Vimala’s hometown in Sungai Petani, Kedah. But as her parents moved to Kuala Lumpur this year, the family will be celebrating the holiday in the city for the first time since their marriage.
Denes and Vimala join theSun in wishing all those who celebrate the Festival of Lights a very happy Deepavali, and a safe journey to those who are travelling back home.

PS: Special thanks … to Mid Valley Megamall for the use of its premises for the shoot; R. Yogash for styling Denes, Vimala and their two children; Vrayz Designs for supplying their wardrobe; and Omtara for their accessories. 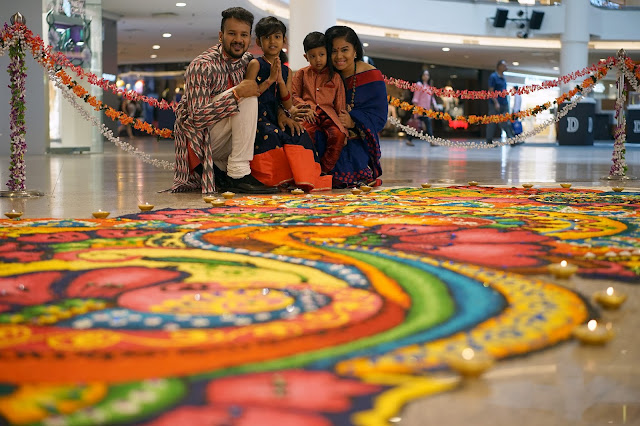 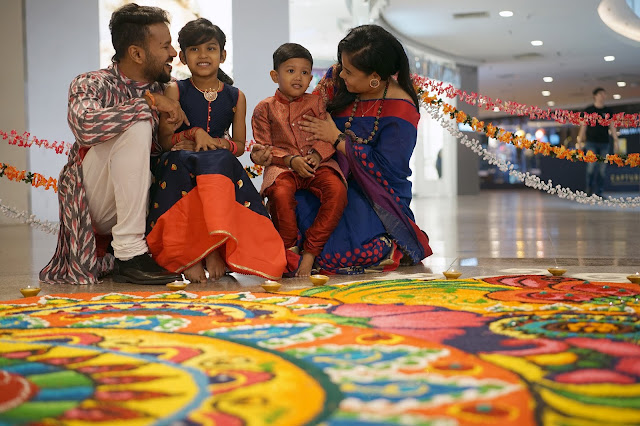 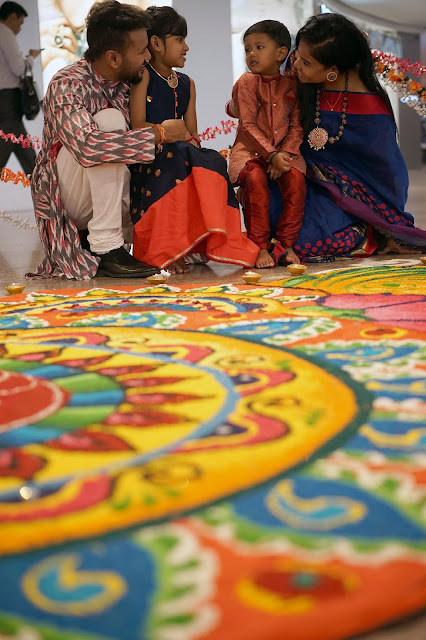 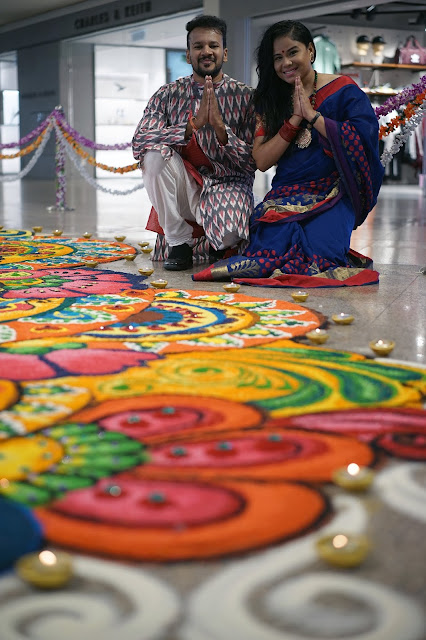 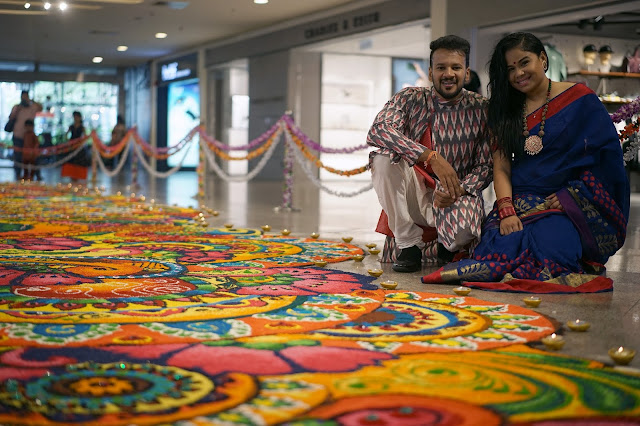 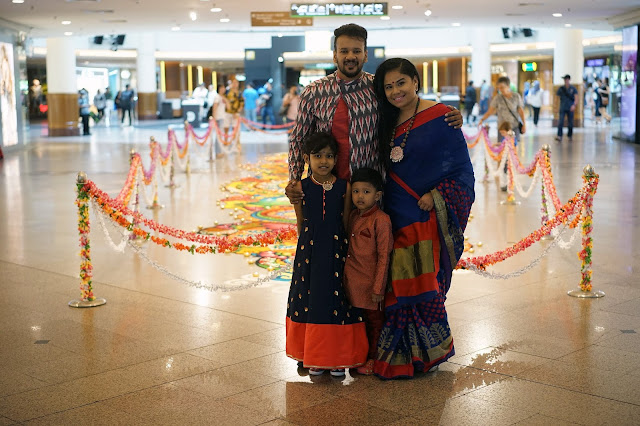 Posted by Bissme at 9:45 PM No comments: 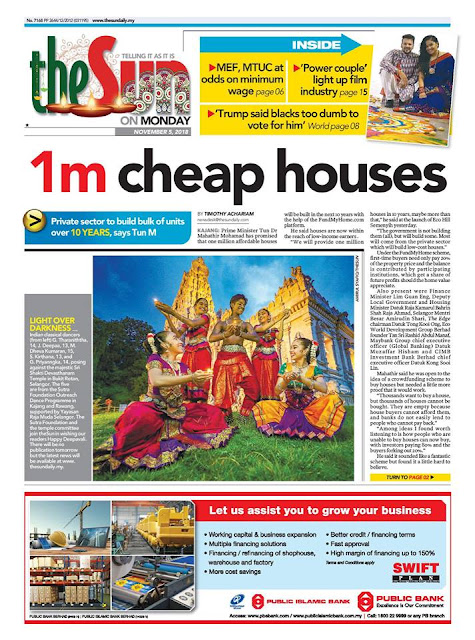 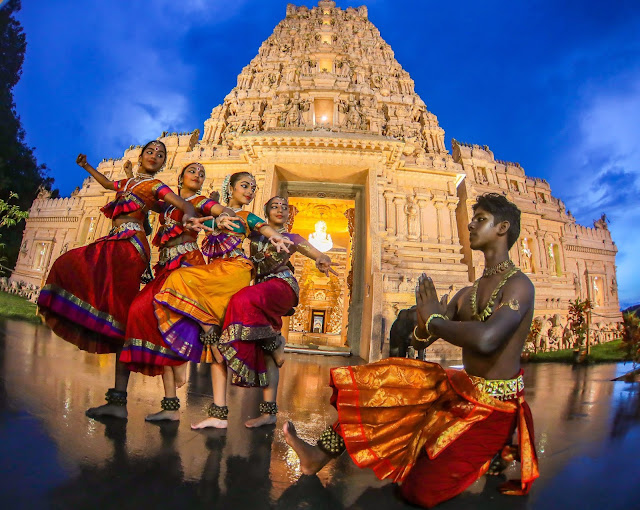 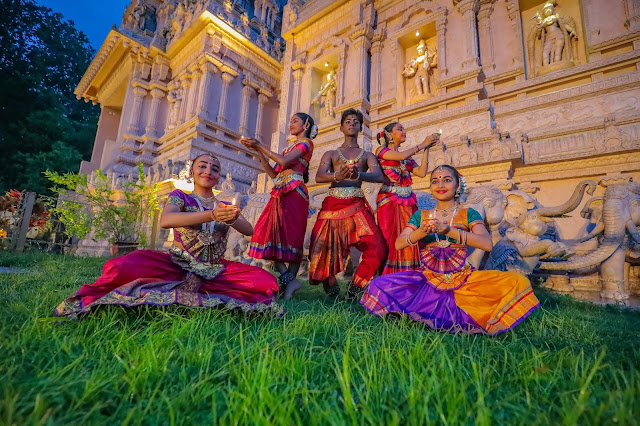 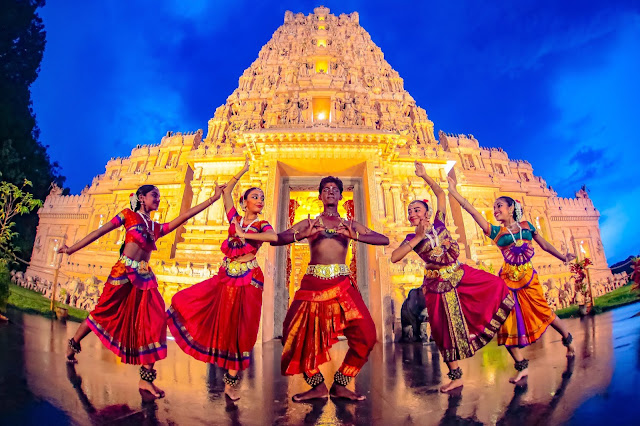 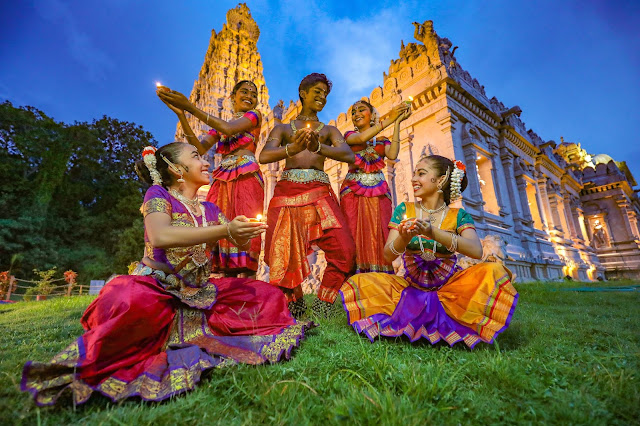 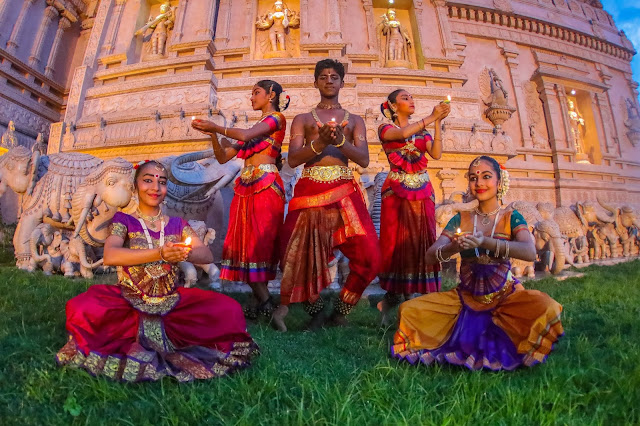 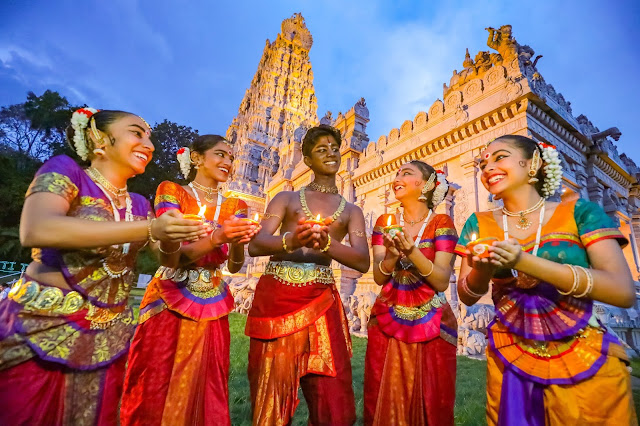 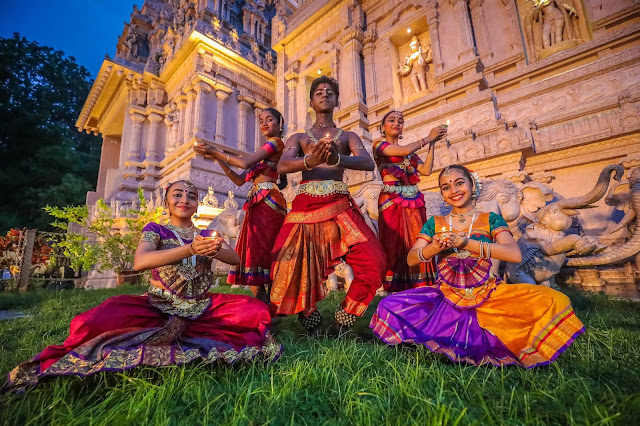 Posted by Bissme at 7:32 PM No comments: