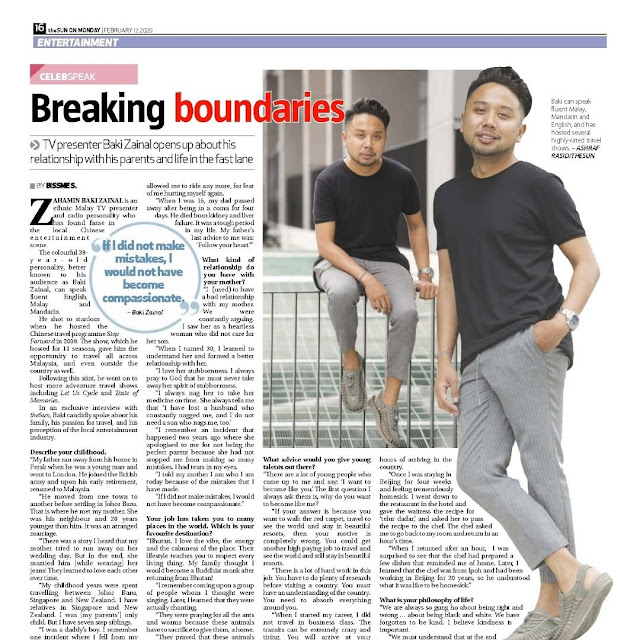 ZAHAMIN BAKI ZAINAL is an ethnic Malay TV presenter and radio personality who has found fame in the local Chinese entertainment scene.
The colourful 39-year-old personality, better known to his audience as Baki Zainal, can speak fluent English, Malay and Mandarin.
He shot to stardom when he hosted the Chinese travel programme Step Forward in 2009. The show, which he hosted for 11 seasons, gave him the opportunity to travel all across Malaysia, and even outside the country as well.
Following this stint, he went on to host more adventure travel shows including Let Us Cycle and Taste of Memories.
In an exclusive interview with theSun, Baki candidly spoke about his family, his passion for travel, and his perception of the local entertainment industry.

“My father ran away from his home in Perak when he was a young man and went to London. He joined the British army and upon his early retirement, returned to Malaysia.
“He moved from one town to another before settling in Johor Baru. That is where he met my mother. She was his neighbour and 20 years younger than him. It was an arranged marriage.
“There was a story I heard that my mother tried to run away on her wedding day. But in the end, she married him [while wearing] her jeans! They learned to love each other over time.
“My childhood years were spent travelling between Johor Baru, Singapore and New Zealand. I have relatives in Singapore and New Zealand. I was [my parents’] only child. But I have seven step siblings.
“I was a daddy’s boy. I remember one incident where I fell from my bicycle when I was six years old.
“My father got rid of it and never allowed me to ride any more, for fear of me hurting myself again.
“When I was 15, my dad passed away after being in a coma for four days. He died from kidney and liver failure. It was a tough period in my life.
“My father’s last advice to me was: ‘Follow your heart.’”

* What kind of relationship do you have with your mother?

“I (used) to have a bad relationship with my mother. We were constantly arguing. I saw her as a heartless woman who did not care for her son.
“When I turned 30, I learned to understand her and formed a better relationship with her.
“I love her stubbornness. I always pray to God that he must never take away her spirit of stubbornness.
“I always nag her to take her medicine on time. She always tells me that ‘I have lost a husband who constantly nagged me, and I do not need a son who nags me, too.’
“I remember an incident that happened two years ago where she apologised to me for not being the perfect parent because she had not stopped me from making so many mistakes. I had tears in my eyes.
“I told my mother I am who I am today because of the mistakes that I have made.
“If I did not make mistakes, I would not have become compassionate.”

*Your job has taken you to many places in the world. Which is your favourite destination?

“Bhutan. I love the vibe, the energy and the calmness of the place. Their lifestyle teaches you to respect every living thing. My family thought I would become a Buddhist monk after returning from Bhutan!
“I remember coming upon a group of people whom I thought were singing. Later, I learned that they were actually chanting.
“They were praying for all the ants and worms because these animals have to sacrifice to give them, a home.
“They prayed that these animals would be reincarnated again to a better life. How great is that!”

*What advice would you give young talents out there?

“There are a lot of young people who come up to me and say: ‘I want to become like you’. The first question I always ask them is, why do you want to become like me?
“If your answer is because you want to walk the red carpet, travel to see the world and stay in beautiful resorts, then your motive is completely wrong. You could get another high paying job to travel and see the world and still stay in beautiful resorts.
“There is a lot of hard work in this job. You have to do plenty of research before visiting a country. You must have an understanding of the country. You need to absorb everything around you.
“When I started my career, I did not travel in business class. The transits can be extremely crazy and tiring. You will arrive at your destination during ungodly hours and you have to start shooting within a few hours of arriving in the country.
“Once I was staying in Beijing for four weeks and feeling tremendously homesick. I went down to the restaurant in the hotel and gave the waitress the recipe for ‘telur dadar’, and asked her to pass the recipe to the chef. The chef asked me to go back to my room and return in an hour’s time.
“When I returned after an hour, I was surprised to see that the chef had prepared a few dishes that reminded me of home. Later, I learned that the chef was from Ipoh and had been working in Beijing for 20 years, so he understood what it was like to be homesick.”

* What is your philosophy of life?

“We are always so gung ho about being right and wrong ... about being black and white. We have forgotten to be kind. I believe kindness is important.
“We must understand that at the end of the day, we are fragile creatures and we can easily break.”
Posted by Bissme at 10:12 PM