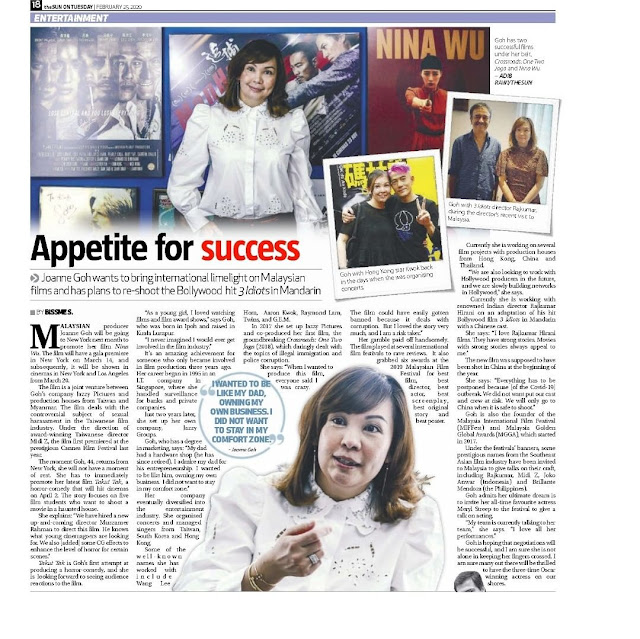 APPETITE FOR SUCCESS
By Bissme S

MALAYSIAN producer Joanne Goh will be going to New York next month to promote her film Nina Wu.
THE film will have a gala premiere in New York on March 14, and subsequently, it will be shown in cinemas in New York and Los Angeles from March 20.
The film is a joint venture between Goh’s company Jazzy Pictures and production houses from Taiwan and Myanmar.
The film deals with the controversial subject of sexual harassment in the Taiwanese film industry.
Under the direction of award-winning Taiwanese director Midi Z, the film first premiered at the prestigious Cannes Film Festival last year.
The moment Goh, 44, returns from New York, she will not have a moment of rest. She has to immediately promote her latest film Takut Tak, a horror-comedy that will hit cinemas on April 2.
The story focuses on five film students who want to shoot a movie in a haunted house.
She explains: “We have hired a new up-and-coming director Muzzamer Rahman to direct this film. He knows what young cinemagoers are looking for. We also [added] some CG effects to enhance the level of horror for certain scenes.”
Takut Tak is Goh’s first attempt at producing a horror-comedy, and she is looking forward to seeing audience reactions to the film.
“As a young girl, I loved watching films and film award shows,” says Goh, who was born in Ipoh and raised in Kuala Lumpur.
“I never imagined I would ever get involved in the film industry.”
It’s an amazing achievement for someone who only became involved in film production three years ago.
Her career began in 1995 in an I.T. company in Singapore, where she handled surveillance for banks and private companies.
Just two years later, she set up her own company, Jazzy Groups.
Goh, who has a degree in marketing, says: “My dad had a hardware shop (he has since retired). I admire my dad for his entrepreneurship. I wanted to be like him, owning my own business. I did not want to stay in my comfort zone.”
Her company eventually diversified into the entertainment industry. She organised concerts and managed singers from Taiwan, South Korea and Hong Kong.
Some of the well-known names she has worked with include Wang Lee Hom, Aaron Kwok, Raymond Lam, Twins, and G.E.M.
In 2017 she set up Jazzy Pictures and co-produced her first film, the groundbreaking Crossroads: One Two Jaga (2018), which daringly dealt with the topics of illegal immigration and police corruption.
She says: “When I wanted to produce this film, everyone said I was crazy. The film could have easily gotten banned because it deals with corruption. But I loved the story very much, and I am a risk taker.”
Her gamble paid off handsomely. The film played at several international film festivals to rave reviews.
It also grabbed six awards at the 2019 Malaysian Film Festival for best film, best director, best actor, best screenplay, best original story and best poster.
Currently she is working on several film projects with production houses from Hong Kong, China and Thailand.
“We are also looking to work with Hollywood producers in the future, and we are slowly building networks in Hollywood,” she says.
Currently she is working with renowned Indian director Rajkumar Hirani on an adaptation of his hit Bollywood film 3 Idiots in Mandarin with a Chinese cast.
She says: “I love Rajkumar Hirani films. They have strong stories. Movies with strong stories always appeal to me.”
The new film was supposed to have been shot in China at the beginning of the year.
She says: “Everything has to be postponed because [of the Covid-19] outbreak. We did not want put our cast and crew at risk. We will only go to China when it is safe to shoot.”
Goh is also the founder of the Malaysia International Film Festival (MIFFest) and Malaysia Golden Global Awards (MGGA), which started in 2017.
Under the festivals’ banners, some prestigious names from the Southeast Asian film industry have been invited to Malaysia to give talks on their craft, including Rajkumar, Midi Z, Joko Anwar (Indonesia) and Brillante Mendoza (the Philippines).
Goh admits her ultimate dream is to invite her all-time favourite actress Meryl Streep to the festival to give a talk on acting.
“My team is currently talking to her team,” she says. “I love all her performances.”
Goh is hoping that negotiations will be successful, and I am sure she is not alone in keeping her fingers crossed.
I am sure many out there will be thrilled to have the three-time Oscar winning actress on our shores.
Posted by Bissme at 10:18 PM