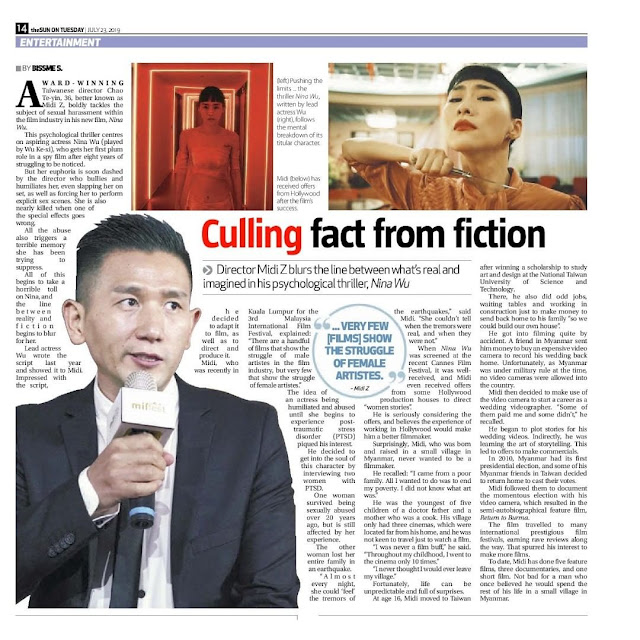 AWARD-WINNING Taiwanese director Chao Te-yin, 36, better known as Midi Z, boldly tackles the subject of sexual harassment within the film industry in his new film, Nina Wu.
This psychological thriller centres on aspiring actress Nina Wu (played by Wu Ke-xi), who gets her first plum role in a spy film after eight years of struggling to be noticed.
But her euphoria is soon dashed by the director who bullies and humiliates her, even slapping her on set, as well as forcing her to perform explicit sex scenes. She is also nearly killed when one of the special effects goes wrong.
All the abuse also triggers a terrible memory she has been trying to suppress.
All of this begins to take a horrible toll on Nina, and the line between reality and fiction begins to blur for her.
Lead actress Wu wrote the script last year and showed it to Midi. Impressed with the script, he decided to adapt it to film, as well as to direct and produce it.
Midi, who was recently in Kuala Lumpur for the 3rd Malaysia International Film Festival, explained: “There are a handful of films that show the struggle of male artistes in the film industry, but very few that show the struggle of female artistes.”
The idea of an actress being humiliated and abused until she begins to experience post-traumatic stress disorder (PTSD) piqued his interest.
He decided to get into the soul of this character by interviewing two women with PTSD.
One woman survived being sexually abused over 20 years ago, but is still affected by her experience.
The other woman lost her entire family in an earthquake.
“Almost every night, she could ‘feel’ the tremors of the earthquakes,” said Midi. “She couldn’t tell when the tremors were real, and when they were not.”
When Nina Wu was screened at the recent Cannes Film Festival, it was well-received, and Midi even received offers from some Hollywood production houses to direct “women stories”.
He is seriously considering the offers, and believes the experience of working in Hollywood would make him a better filmmaker.
Surprisingly, Midi, who was born and raised in a small village in Myanmar, never wanted to be a filmmaker.
He recalled: “I came from a poor family. All I wanted to do was to end my poverty. I did not know what art was.”
He was the youngest of five children of a doctor father and a mother who was a cook. His village only had three cinemas, which were located far from his home, and he was not keen to travel just to watch a film.
“I was never a film buff,” he said. “Throughout my childhood, I went to the cinema only 10 times.”
“I never thought I would ever leave my village.”
Fortunately, life can be unpredictable and full of surprises.
At age 16, Midi moved to Taiwan after winning a scholarship to study art and design at the National Taiwan University of Science and Technology.
There, he also did odd jobs, waiting tables and working in construction just to make money to send back home to his family “so we could build our own house”.
He got into filming quite by accident. A friend in Myanmar sent him money to buy an expensive video camera to record his wedding back home. Unfortunately, as Myanmar was under military rule at the time, no video cameras were allowed into the country.
Midi then decided to make use of the video camera to start a career as a wedding videographer. “Some of them paid me and some didn’t,” he recalled.
He began to plot stories for his wedding videos. Indirectly, he was learning the art of storytelling. This led to offers to make commercials.
In 2010, Myanmar had its first presidential election, and some of his Myanmar friends in Taiwan decided to return home to cast their votes.
Midi followed them to document the momentous election with his video camera, which resulted in the semi-autobiographical feature film, Return to Burma.
The film travelled to many international prestigious film festivals, earning rave reviews along the way. That spurred his interest to make more films.
To date, Midi has done five feature films, three documentaries, and one short film. Not bad for a man who once believed he would spend the rest of his life in a small village in Myanmar.