The handsome actor Hun Haqeeem speaks to me about penetrating Hollywood. We meet in cafe in Bangsar Village 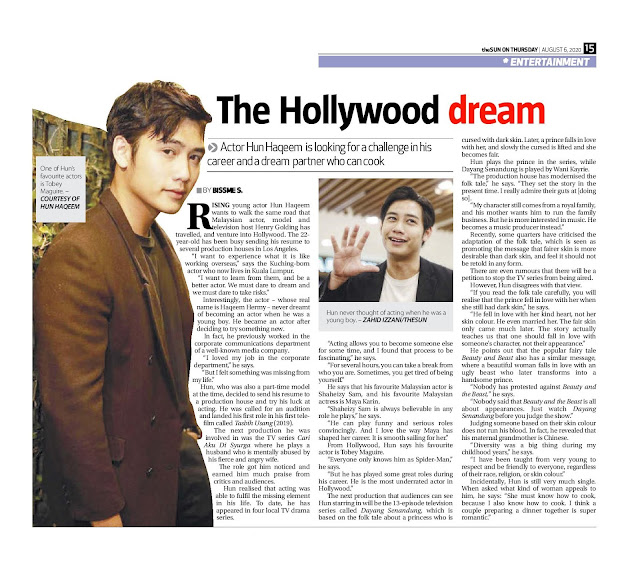 RISING young actor Hun Haqeem wants to walk the same road that Malaysian actor, model and television host Henry Golding has travelled, and venture into Hollywood. The 22-year-old has been busy sending his resume to several production houses in Los Angeles.

“I want to experience what it is like working overseas,” says the Kuching-born actor who now lives in Kuala Lumpur.

Interestingly, the actor – whose real name is Haqeem Hermy – never dreamt of becoming an actor when he was a young boy. He became an actor after deciding to try something new.

In fact, he previously worked in the corporate communications department of a well-known media company.

“I loved my job in the corporate department,” he says.

“But I felt something was missing from my life.”

Hun, who was also a part-time model at the time, decided to send his resume to a production house and try his luck at acting. He was called for an audition and landed his first role in his first tele- film called Tasbih Usang (2019).

The next production he was involved in was the TV series Cari Aku Di Syurga where he plays a husband who is mentally abused by his fierce and angry wife.

The role got him noticed and earned him much praise from critics and audiences.

Hun realised that acting was able to fulfil the missing element in his life. To date, he has appeared in four local TV drama series.

“Acting allows you to become someone else for some time, and I found that process to be fascinating,” he says.

“For several hours, you can take a break from who you are. Sometimes, you get tired of being yourself.”

“Shaheizy Sam is always believable in any role he plays,” he says.

“He can play funny and serious roles convincingly. And I love the way Maya has shaped her career. It is smooth sailing for her.”

From Hollywood, Hun says his favourite actor is Tobey Maguire.

“Everyone only knows him as Spider-Man,” he says.

“But he has played some great roles during his career. He is the most underrated actor in Hollywood.”

The next production that audiences can see Hun starring in will be the 13-episode television series called Dayang Senandung, which is based on the folk tale about a princess who is cursed with dark skin. Later, a prince falls in love with her, and slowly the cursed is lifted and she becomes fair.

Hun plays the prince in the series, while Dayang Senandung is played by Wani Kayrie.

“The production house has modernised the folk tale,” he says. “They set the story in the present time. I really admire their guts at [doing so].

“My character still comes from a royal family, and his mother wants him to run the family business. But he is more interested in music. He becomes a music producer instead.”

Recently, some quarters have criticised the adaptation of the folk tale, which is seen as promoting the message that fairer skin is more desirable than dark skin, and feel it should not be retold in any form.

There are even rumours that there will be a petition to stop the TV series from being aired.

However, Hun disagrees with that view.

“If you read the folk tale carefully, you will realise that the prince fell in love with her when she still had dark skin,” he says.

“He fell in love with her kind heart, not her skin colour. He even married her. The fair skin only came much later. The story actually teaches us that one should fall in love with someone’s character, not their appearance.”

He points out that the popular fairy tale Beauty and Beast also has a similar message, where a beautiful woman falls in love with an ugly beast who later transforms into a handsome prince.

“Nobody has protested against Beauty and the Beast,” he says.

“Nobody said that Beauty and the Beast is all about appearances. Just watch Dayang Senandung before you judge the show.”

Judging someone based on their skin colour does not run his blood. In fact, he revealed that his maternal grandmother is Chinese.

“Diversity was a big thing during my childhood years,” he says.

“I have been taught from very young to respect and be friendly to everyone, regardless of their race, religion, or skin colour.”

Incidentally, Hun is still very much single. When asked what kind of woman appeals to him, he says: “She must know how to cook, because I also know how to cook. I think a couple preparing a dinner together is super romantic.”

Posted by Bissme at 8:25 PM No comments: 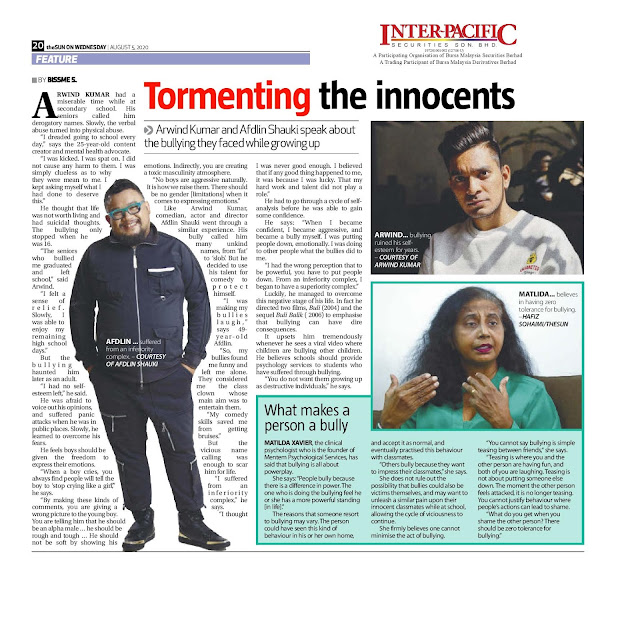 Headline: Tormenting The Innocents
By Bissme S
ARWIND KUMAR had a miserable time while at secondary school. His seniors called him derogatory names. Slowly, the verbal abuse turned into physical abuse.
“I dreaded going to school every day,” says the 25-year-old content creator and mental health advocate.
“I was kicked. I was spat on. I did not cause any harm to them. I was simply clueless as to why they were mean to me. I kept asking myself what I had done to deserve this.”
He thought that life was not worth living and had suicidal thoughts. The bullying only stopped when he was 16.
“The seniors who bullied me graduated and left school,” said Arwind.
“I felt a sense of relief. Slowly, I was able to enjoy my remaining high school days.”
But the bullying haunted him later as an adult.
“I had no self-esteem left,” he said.
He was afraid to voice out his opinions, and suffered panic attacks when he was in public places. Slowly, he learned to overcome his fears.
He feels boys should be given the freedom to express their emotions.
“When a boy cries, you always find people will tell the boy to ‘stop crying like a girl’,” he says.
“By making these kinds of comments, you are giving a wrong picture to the young boy. You are telling him that he should be an alpha male ... he should be rough and tough ... He should not be soft by showing his emotions. Indirectly, you are creating a toxic masculinity atmosphere.
“No boys are aggressive naturally. It is how we raise them. There should be no gender [limitations] when it comes to expressing emotions.”
Like Arwind Kumar, comedian, actor and director Afdlin Shauki went through a similar experience. His bully called him many unkind names, from ‘fat’ to ‘slob’. But he decided to use his talent for comedy to protect himself.
“I was making my bullies laugh,” says 49-year-old Afdlin.
“So, my bullies found me funny and left me alone. They considered me the class clown whose main aim was to entertain them.
“My comedy skills saved me from getting bruises.”
But the vicious name calling was enough to scar him for life.
“I suffered from an inferiority complex,” he says.
“I thought I was never good enough. I believed that if any good thing happened to me, it was because I was lucky. That my hard work and talent did not play a role.”
He had to go through a cycle of self-analysis before he was able to gain some confidence.
He says: “When I became confident, I became aggressive, and became a bully myself. I was putting people down, emotionally. I was doing to other people what the bullies did to me.
“I had the wrong perception that to be powerful, you have to put people down. From an inferiority complex, I began to have a superiority complex.”
Luckily, he managed to overcome this negative stage of his life. In fact he directed two films, Buli (2004) and the sequel Buli Balik ( 2006) to emphasise that bullying can have dire consequences.
It upsets him tremendously whenever he sees a viral video where children are bullying other children. He believes schools should provide psychology services to students who have suffered through bullying.
“You do not want them growing up as destructive individuals,” he says.
Side bar :
Headline What makes a person a bully
MATILDA XAVIER, the clinical psychologist who is the founder of Mentem Psychological Services, has said that bullying is all about powerplay.
She says: “People bully because there is a difference in power. The one who is doing the bullying feel he or she has a more powerful standing [in life].”
The reasons that someone resort to bullying may vary. The person could have seen this kind of behaviour in his or her own home, and accept it as normal, and eventually practised this behaviour with classmates.
“Others bully because they want to impress their classmates,” she says.
She does not rule out the possibility that bullies could also be victims themselves, and may want to unleash a similar pain upon their innocent classmates while at school, allowing the cycle of viciousness to continue.
She firmly believes one cannot minimise the act of bullying.
“You cannot say bullying is simple teasing between friends,“ she says.
“Teasing is where you and the other person are having fun, and both of you are laughing. Teasing is not about putting someone else down. The moment the other person feels attacked, it is no longer teasing. You cannot justify behaviour where people’s actions can lead to shame.
“What do you get when you shame the other person? There should be zero tolerance for bullying.”
Posted by Bissme at 8:13 PM No comments: